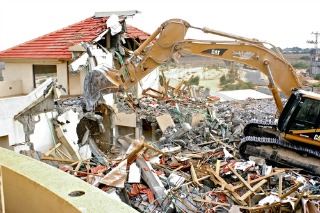 After an attack near the Gaza border killed over 30 soldiers in October of last year, the response was fast and furious. Hundreds of homes would be destroyed to eliminate smuggling tunnels and a few hundred meters long security buffer to be created. Everyone in that newly protected path forced to evacuate. Local officials defended the actions as necessary to protect their security and to prevent the creation of tunnels used by terrorists.

Phase two of that operation is being implemented this week, with the “protected” area now being widened and extended an additional 500 meters with another 2000 or so families displaced from their homes. Since Gaza is such a sensitive area and hotbed for media coverage, one would expect this would lead to massive international protests and regular coverage in the European and American media.

So why does no one outside of the immediate area seem to really care? Well, because its Egypt and not Israel taking the action. When Egypt first made the announcement following the incident on the border with Sinai in late October, there was some​ ​coverage but this most recent action is even more draconian and yet has only been covered by a ​handful of ​outlets that focus on ​Egypt-related news​.

How can the ​international ​community and media who have so often come down hard on Israeli actions possibly justify ​the newfound lack of attention​? I guess they could just argue that the Israeli-Palestinian issue is a broader one and/or that Israel’s actions and reactions are somehow worse. Or maybe some would argue that Egypt is only doing it at the behest of Israel (which is almost certainly both true and also not the reason they are taking this kind of action). ​​Or maybe just that two wrongs don’t make a right.

Regardless, it serves as a telling reminder of how the media does what it does. Whether its bias regarding Israel or just a bias towards conflict which is far less prevalent when Israel isn’t involved, it’s a double standard and one the ​international ​media can’t possibly defend.