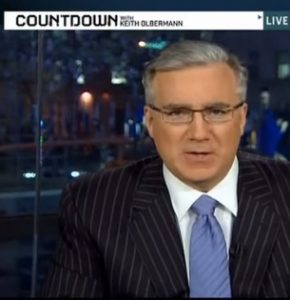 In the wake of Keith Olbermann’s departure from MSNBC, we’re all reminded that while MSNBC was appearing to tilt its coverage toward the populist progressive majority, nonetheless the corporate Right imperative of the media dominates our airwaves. If we want news and analysis that serves the interests of working families instead of corporate boardrooms, we need an independent — but effective — network for the nation. We could create a Hound News Channel if we had more populist progressives with an appetite and talent for entertaining journalism and analysis.

General Electric used to own all of MSNBC, now Comcast holds a controlling interest, but the details don’t really matter. Across the board, a very small number of very large corporations control the vast majority of media we all consume. Don’t play naïve — you know it makes a difference. Anyone who’s picked up a prescription at a small, local pharmacy and picked up a prescription at Wal-Mart knows the difference between small, independent businesses and behemoth, profit-focused corporations. The local pharmacist wants you to get the information and help you need. Wal-Mart just wants your money.

That’s the reason public media still gets the highest ratings for trustworthiness nationwide. Good news is independent news, not news that serves a single, narrow agenda. Yet progressives have the opposite problem from corporate talking heads in the media — progressives are over-reliant on rational thought and the notion that the truth, however presented, will find its way to America’s ears.

Thus in their presentation of facts and ideas, progressives are generally more loyal to substance than style. Progressive outlets like Free Speech TV and Democracy Now provide coverage that is so thorough and fair it can tend to be boring. Sorry, it’s true. As we’ve learned from reality TV, the more dramatic and polarizing the show, the more popular it is. It’s why, despite being rather a-political, the Daily Show and Colbert Report are such hits in the mainstream and why comedians like Baratunde Thurston, Lizz Winstead and Elon James White are such subterranean cult heroes — they actually reflect the sense of humor and entertainment that progressives, by and large, lack.

How else — at a time when corporate profits are at record highs while wages for working Americans continue to stagnate (for those lucky enough to have jobs) — could Americans be persuaded to elect pro-big business Republicans and accept more tax cuts for the rich? It’s time we stop fooling ourselves that big business-owned media will somehow report news in a way that doesn’t inherently tip the scales of public opinion toward corporate interests. If we want news that serves the public interest, we’re going to need a public interest network.

That doesn’t mean the Hound News Network has to be government funded or even a non-profit supported by donations. It can be a successful, but small and independent, business — successful precisely because it fills the gaping hole that corporate media has left in public consciousness. And successful because its funny, not loud; clever, not condescending; and deeply mainstreamed and culturally relevant, as opposed to self-marginalizing fringe. In other words, to succeed, the Hound News Network or whatever we create must take the best of progressive earnestness and truth-telling paired with an actual grasp of what actually entertains the majority of Americans. Enough preaching to the choir. The whole nation needs to hear progressive voices.

Funnily enough, I don’t think Olbermann is particularly stunning at melding politics and populism — he’s just strikingly better at it than almost anyone else with his politics in his line of work. But if we set our sights higher, let’s take note that even Bill O’Reilly and Jon Stewart combined don’t have the ratings of Glee or Dancing With The Stars. How can we create a populist, popular news outlet for everyday Americans that literally keeps up with the Kardashians?

In a fox hunt, the hound sniffs out the truth and leads the crowd toward the right direction. Translated to the media, that’s one part journalism and one part entertainment — the hound has to get people’s attention before they’ll even think of following. I think working Americans desperately need an independent news network on their side — but to get there, we need independent progressive media voices willing to step out of the choir room of self-marginalization and blaze an irresistibly entertaining path to truth and justice for all.

Sally Kohn is a community organizer, political commentator and occasional social satirist. She is the Founder and Chief Education Officer of the Movement Vision Lab .