Time Inc. Is On A Mission: To Rescue Detroit 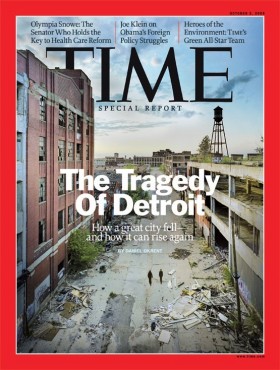 The first words of Daniel Okrent‘s cover story for Time magazine are telling: “If Detroit had been savaged by a hurricane and submerged by a ravenous flood, we’d know a lot more about it.” It is what I first thought when I saw the cover of the new issue of Time flash on the screen of Morning Joe today: Katrina. After Katrina, the cri de coeur was about saving a great American city; there has been no such cri about Detroit, save from Mitt Romney when he’d say anything to win Michigan

Yet here’s a staggering statistic about Detroit, put in context by Okrent: “Three years after Katrina devastated New Orleans, unemployment in that city hit a peak of 11%. In Detroit, the unemployment rate is 28.9%. That’s worth spelling out: twenty-eight point nine percent.”

But, as Okrent says, the tragedy of Detroit “has long been a slow unwinding that seemed to remove it from the rest of the country” — and even the death throes of the auto industry have brought with it a weird kind of schadenfreude, between scolding the Big Three CEOs for their private jets to Washington and clucking about how American cars aren’t as good as foreign cars and have been unduly protected (never mind articles like this: “Five Reasons Not to Buy American Cars“). Considering that Detroit is basically a one-industry town (and that industry sure ain’t newspapers!), it’s hard to see Detroit as anything but pretty damn screwed.

Time Inc. wants to change that — and so they’ve kicked off an ambitious, year-long project called “Assignment: Detroit” — they bought a house, staffed it up, and will be reporting on the ground for the next year.

In a rare joint publisher’s letter, running in both Time and Fortune, Time Inc’s John Huey says this:

Why would we ever do such a thing? Because we believe that Detroit right now is a great American story. No city has had more influence on the country’s economic and social evolution. Detroit was the birthplace of both the industrial age and the nation’s middle class, and the city’s rise and fall — and struggle to rise again — are a window into the challenges facing all of modern America. From urban planning to the crisis of manufacturing, from the lingering role of race and class in our society to the struggle for better health care and education, it’s all happening at its most extreme in the Motor City.

So to that end, says Huey, they’re going to “flood the D-zone” (urk) with a phalanx of journos, photogs, bloggers and videographers from Time, Fortune, Sports Illustrated, Money and their various dot-coms. They’ve got a blog. They’ve got a Twitter. CNN Money is running a series of videos. Hopefully for the D-zone all that will lead to a flood of money back into the city — or at least generate some interest and outrage on its behalf outside its midwestern environs. 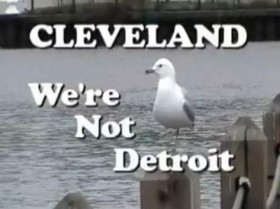 But will the country even care? Let’s put it this way: There are no commemorative picture-books memorializing the destruction of Detroit. The city’s falling fortunes are not exactly a hidden scoop — indeed, it’s risen to a darkly acceptable punchline (the still to the right is taken from a spoof video for Cleveland tourism — and it was featured in native Michigan son Michael Moore‘s most recent film, Capitalism: A Love Story). But on the bright side, maybe that caring is nigh: “Detroit: The Death — and Possible Life — of a Great American City” is right now both the Most Read and Most Emailed story on Time.com.

So maybe the story of Detroit will end up being…a profitable one? One that generates not only the good karma of covering an important American story but the necessary clicks to justify funding it? These are of course the daily battles in media toda — if we’re gonna cover it, how are we gonna pay for it? Snark though you might about Megan Fox coverage (MEGAN FOX BOOBS! There, we just justified the time we’ve spent on this post) but the reality is stark: Investing the time and money to cover this story means somewhere, somehow, that money has to be made back. And clearly, that money hasn’t been coming from Detroit bureaus over the past few years, since so many of them have been closed one by one — including Time‘s. So you can snark on that, too, but at the end of the day this is what journalism is supposed to be about at its best: Shining a light, and helping to make things better.

Back to Detroit. Daniel Okrent is from there, and he’s the right writer for this story — a straightforward storyteller, not too maudlin, but with a few twists of the knife:

If, like me, you’re a Detroit native who recently went home to find out what went wrong, your first instinct is to weep. If you live there still, that’s not the response you’re looking for. Old friends and new acquaintances, people who confront the city’s agony every day, told me, “I hope this isn’t going to be another article about how terrible things are in Detroit.”

Cut to the heading of the next section: “My City of Ruins.” Ouch.
The larger “ouch” comes from the fact that Okrent is not only telling a personal story along with the engrossing tale of Detroit as a city, that could easily stand on its own — it comes form the larger implications. To put it bluntly, Detroit is the canary in the coal mine — we’ve already seen that with the newspaper industry, cutting back home delivery to a few days per week, and we’ve certainly seen that with the implosion of the American auto industry over this last year (longer, surely, but this last year has been the doozy, complete with the impossilbe-sounding “B” word). Here’s Okrent:

What indeed. I guess Time Inc. will spend the next year telling us.

Related:
Detroit: The Death — and Possible Life — of a Great American City [Time]
Assignment Detroit: Why Time Inc. is in Motown [Time]
“The Green Car Economy That May Well Be Detroit’s Last Hope” [Fortune]
Investment in a City of Struggles [NYT]