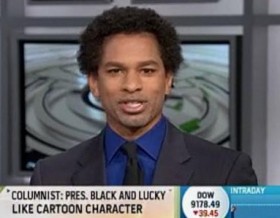 Editor’s Note: On Friday MSNBC had booked regular contributor Touré on The Dylan Ratigan Show to deliver a “rant” on NBC’s 30 Rock and their use of blackface as a comedic device. Alas, he was bumped by Bill Clinton‘s improvised filibuster of a Presidential press conference and his commentary never made air. Fortunately he has graciously agreed to allow Mediaite to republish his thoughts here, which follow below:

Blackface is the third rail of the American stage. Any time a white person significantly darkens their skin and steps in front of an audience they risk deeply offending much of the audience and suffering a performative death. Blackface originates from white actors in the 1800s who used makeup to darken their skin and then do horrific caricatures of Black people which helped perpetuate the image of Blacks as lesser human beings. Whenever a modern performer blackens up they tap into deep pains in the American collective memory. When Ted Danson put on blackface at a Friars Club roast he almost lost his career. Angelina Jolie is so beloved that she was able to steal sweet Jennifer Aniston’s widely-coveted husband and remain a hot commodity but when she merely browned her skin to play terrorism widow Marianne Pearl in A Mighty Heart many feathers were ruffled and the film did poorly at the box office. And yet somehow Tina Fey, the genius behind 30 Rock, the best sitcom on TV, can repeatedly put a character in blackface and succeed. How does she do it?

On Thursday’s episode, Fey put Jenna, who’s played by Jane Krakowski, in blackface for the second time, and I nearly died laughing. One of the reasons it succeeded is because it was placed in a situation that was completely ridiculous. Jenna was at a costume party dressed as the legendary Pittsburgh Steelers wide receiver Lynn Swann and mirroring her cross-dressing boyfriend as he’s giving us Natalie Portman in the great new film Black Swan and thus they’re two Black swans.

This works where so many other attempts at blackface have failed because Fey’s not using blackface as a simplistic visual way of turning a white person Black but as a complex tool that makes a multi-layered joke at the character’s expense. Jenna is a dimwit and the audience knows that for her to think blackening up is ok adds to the perception that she’s simpleminded. (Fey also buys herself space because on a previous episode, the first time Jenna went into blackface, Tina’s Liz Lemon clearly indicated she knew that was a bad idea so in that way the show was sortof ombudsmanning itself.)

But more than that, you can feel Fey’s massive comedic cojones as she fearlessly makes a very edgy racial joke. I respect Fey’s courage to purposely touch that third rail in a smart way. And I love that Fey is willing to do edgy racial comedy and refuses to cede ownership of that space to Black comics. She asserts her right to play in the sandbox of race because she knows that as an American the conversation of race is open to everyone. You just gotta do it in a smart way.