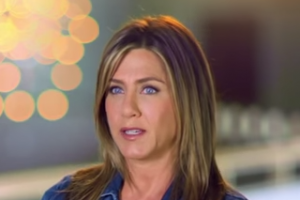 Do you know how many biological children Jennifer Aniston would have if she really was pregnant every time the front of a magazine announced she was? Hundreds. Seriously, hundreds.

Ever since Brad Pitt divorced her and got with Angelina Jolie in 2005, Aniston has been labeled the scorned woman by tabloids. Rather than tracking her illustrious career or philanthropic efforts, they targeted her for being “unlucky in love,” insisting that she couldn’t keep a man. They wrote nonstop about how lonely she was, how desperate she was to be married again, and how much she wanted to have kids. After incessant speculation about her left ring finger, she’s married now to Justin Theroux, which hasn’t slowed down the coverage of her womb or the likelihood of their divorce. She cannot win.

What she can do, however, is fight back. Today, she did that by writing a blog post for Huffington Post. She titled it “For the Record” and here’s how it started:

Let me start by saying that addressing gossip is something I have never done.  I don’t like to give energy to the business of lies, but I wanted to participate in a larger conversation that has already begun and needs to continue. Since I’m not on social media, I decided to put my thoughts here in writing.

For the record, I am not pregnant. What I am is fed up. I’m fed up with the sport-like scrutiny and body shaming that occurs daily under the guise of “journalism,” the “First Amendment” and “celebrity news.”

The post went on to criticize the army of paparazzi that follows the movements of the actress and her husband, then zeroed in on its real target: our culture. According to Aniston, constant speculation about her relationship and motherhood statuses proves that “the way [she is] portrayed by the media is simply a reflection of how we see and portray women in general, measured against some warped standard of beauty.” She lambasted tabloids for promoting unfair ideas of beauty and success to little girls. She vented about the wastefulness of spending so much time trying to find out if she is pregnant or not. She really, really went in on the whole culture and did not hold back.

Here is another portion worth note:

She said that if and when she becomes a mother, it won’t be due to a feeling of incompleteness. For now, she is invested in fighting, and we quote, “the bullshit.”