To Freak Out Or Not: Whatever Became Of The Terror Alert System?

To Freak Out Or Not: Whatever Became Of The Terror Alert System? 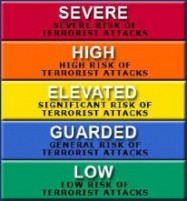 This holiday weekend featured news of not just one, but two potential terror attacks (though the latter appeared to be no more than just a long stay in the bathroom.) Had this happened during the Bush Administration, we would have had a steady diet of former Department of Homeland Security head Tom Ridge and the ubiquitous color-coded terror alert system. Under President Obama — well, three days later, we finally see him speak. Which leaves us to ask: are we better off with or without the color bars? Or put another way, should we be freaking out right now or not?

When news broke that another disruptive passenger had prompted an alert on another Northwest Airlines flight to Detroit on Sunday, I suddenly experienced a sinking feeling that I had not felt since the days that followed 9/11. In New York City, the sound of helicopters circling overhead no longer sounded like background noise for the cosmopolitan hustle and bustle, but rather a disquieting reminder of how highly valued this city is as a potential target.

Had Umar Farouk Abdulmutallab‘s attempted attack happened in the early to mid-aughts, we would have seen and heard about the color-coded bars of terror alert status on a day-to-day basis, and passed machine gun-toting personnel in midtown — in short, our hearts would have been filled with terror. In this most recent instance, government officials have seemed almost relaxed, as if there were no real need to worry. Or maybe they seemed caught off-guard — which in turn, fills one’s heart with terror.

In truth, the color-coded system is still very much in place, though not really in the news (best evidenced by a Google News search that reveals almost no results. So, its not that the system was done away with. Its just never mentioned by any Government official of real import.

I was never a big believer in the coded color terror alert system. I criticized it privately because I felt it failed to realistically convey a complicated sense of danger and risk. I also felt that it played right into the hands of terrorists, whose real goal is to disrupt normal life through the threat of random acts of violence against innocent civilians.

That said, I now see value in this system where I saw little before. The color coded alert system reminded us that the Department of Homeland Security, the CIA, and the FBI were, somehow, on top of it. Perhaps had the Obama administration responded in a more timely and competent manner I wouldn’t be missing the silly colored bars. But Janet Napolitano‘s inadequate back-and-forth on how the system worked “like clockwork,” then “failed miserably,” and President Obama‘s failure to make a statement for days — lead me to question the administration’s core competency moving forward.

New York House Republican Peter King has been a very vocal critic of the President over the past weekend. Speaking in the future tense during an interview with CNN, King branded the “what-if” scenario as “the Christmas Massacre” and spoke at length about what might have been. Was he making these claims to gain political advantage? Absolutely — but that doesn’t completely discredit his message.

Obama should have made an on-camera statement right after news of the failed attack broke, instead of three days later, if only to mollify his critics, and remind everyone else that he’s on top of it. Instead, we were left with the White House press corps filing reports with Waikiki in the background — not great imagery for an administration that so highly values perception.

I never thought I’d see the day that I’d miss those over simplistic color-coded bars. And maybe, its not the bars that I miss. But the bars represent a constant attention to detail and obsession with forces of evil, and that is something that I’m starting to miss.