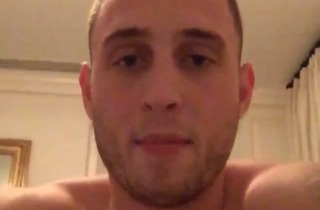 Actor Tom Hanks‘ son Chet Haze, a self-styled rapper, has found himself in an intense Internet war with Howard Stern, stemming from a longtime feud the two have had ever since Stern called Hanks out over his wealthy upbringing.

On Monday, Haze (real name: Chester Hanks) unloaded on Stern in a series of tweets, many of which have since been deleted. Here’s the full rant transcribed, courtesy of Gossip Cop:

Let me come up on your show b*tch… Come catch this fade… have me live on the air and we can go pound for pound see who looks like the fool you dried up old c*nt catch this fade… easy to talk sh*t in a closed off room p*ssy, have me up there in the studio with you let’s give the ppl what they want… give your sorry ass white yuppie fans some entertainment and invite me up there, I promise I won’t physically whoop your ass… I know you got security old man I’ll just intellectual debate with you and show the world you’re really just a dried up hater… stop ducking me behind closed doors invite me up there and I’ll sh*t on your whole world you f*cking Jheri curled c*nt.

If you keep ignoring me it only proves you a P*SSY ( )V( )… I don’t gotta be a gangsta or from the hood to whoop your sickly ass… You been frail and weakly ya whole life! #frail #sickly #fragile you know I will f*ck you up hahaaaa #bitch… Howie… Do you have any idea how badly I am going to assault you when I see you… You can’t run from me forever knock knees… Howie… Listen. One day, maybe tomorrow, maybe 10 years from now, I am going to see you in person, and I am going to hurt you… I hope you travel with security!!! PLEASE have me on the show… I’ll sh*t on you and your yuppie side kicks on your own show… it’s a shame you don’t hang in the same circles as my family (not enough bread for that) cuz if you did I woulda already seen u.

But he wasn’t done there, calling himself a “walking PR disaster” and betting that entertainment sites would write about his rank the next day:

I AM A WALKING PR DISASTER AND I COULD LITERALLY GIVE A FUCK LESS!!!!!! OH WAIT I MEANT I LITERALY DONT GIVE A SINGLE FUCK!!!!

THATS WHAT SEPARATES ME FROM YOU PUSSIES… I DONT LIVE MY LIFE BY ANYBODYS RULES BUT MY OWN… SUCK MY FUCKING DICK!!!! LMAOOOO!!!!!

And, as he predicted, everyone from Breitbart to Perez Hilton and Fox News have covered the story.