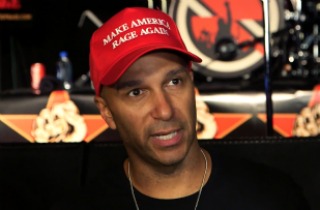 Political activist Tom Morello says that he’s got big plans for his new musical project, and they involve throwing a wrench in the Republican National Convention come this July.

The guitarist is well known as one of the key innovators behind Rage Against The Machine (RATM), and he’s been using this week to introduce his new supergroup to the world: Prophets of Rage. The group is a collective of members from RATM, Public Enemy and Cypress Hill, and he said in an interview with Bloomberg Politics that they know exactly where to go with their message:

“Well there’s a thing called the Republican National Convention in July, and that will be a perfect place for a band like Prophets of Rage to cause a raucous, and we will be there on the streets, in the field.”

Morello has had plenty of experience with this kind of activity before. He has embraced left-leaning stances on a wide variety of issues, and as Rolling Stone noted, RATM received major attention in 2008 when they crashed that year’s Republic Convention in Minnesota.

You can learn about Prophets of Rage in the video above, via Bloomberg Politics.