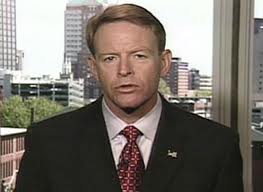 Tony Perkins, president of the Family Research Council, is a controversial figure, so it hardly comes as a surprise when he makes provocative remarks. The most recent installment is about the Secret Service scandal — which he compared to President Obama‘s repeal of Don’t Ask Don’t Tell. Speaking to radio host Janet Mefferd, Perkins said we “cannot maintain moral order” if we pick and choose what aspects of morality to enforce.

You know one issue that I think has not gotten as much attention as it deserves to get is the homosexuality issue. A lot of people have talked about Mitt Romney and what he did with the gay marriage issue and so forth in Massachusetts, but even Politico and the New York Times have talked a lot about the increasing number of top Republicans who are donating to pro-gay causes, the extent to which the GOP doesn’t want to fight on this issue anymore. But we as Christians can’t stand stop fighting on this issue, Tony, so what do we do when we’re faced with a race where maybe we feel like the candidates are way too similar on this and both of them are wrong?

Yeah, you know that’s a great point. Just for a moment step back and look at the implications of this, over the weekend we saw the news of the President’s Secret Service detail in Colombia and the issue of them hiring prostitutes and now the White House is outraged about that. Actually in a meeting this morning my staff asked, ‘why should the President be upset’? It was actually legal; it was legal there to do that, so why should we be upset? Well, the fact is we intuitively know it’s wrong, there’s a moral law against that.

The same is true for what the President has done to the military enforcing open homosexuality in our military. You can change the law but you can’t change the moral law that’s behind it. You can change the positive law, the law that is created by man, but you can’t change the moral law, it’s wrong. So what you have is you have a total breakdown and you can’t pick and choose. Morality is not a smorgasbord; you can’t pick what you want. I think you’re absolutely right, this is a fundamental issue going forward because if we say ‘let them do what we want,’ what’s next? You cannot maintain moral order if you are willing to allow a few things to slide.

So, the DADT repeal broke moral law, and thus led to a moral breakdown that paved the way for a Secret Service prostitution scandal? There are no words. But, to say the very least, it’s insulting and demeaning to those who can now serve openly in the military. It’s disrespectful. Not to mention, the two situations simply are not comparable. Yet sadly, given some things Perkins has said in the past, it’s not entirely shocking.