Ted Nugent Defends Obama Remarks, Refers To Himself As ‘Black Jew At A Nazi-Klan Rally’
audio

Ted Nugent Defends Obama Remarks, Refers To Himself As ‘Black Jew At A Nazi-Klan Rally’ 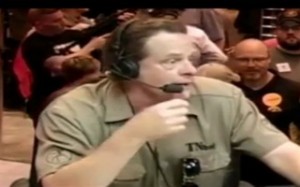 Responding to the firestorm following his remarks over the weekend, Ted Nugent took to Dana Loesch‘s radio show on FM NewsTalk 97.1 to brush off the criticism. Doubling down on his views, Nugent said he stands by his speech. “I’m a black Jew at a Nazi-Klan rally,” he said — referring to those in the federal government who “despise” him for his “audacity to speak the truth.”

Nugent has been enveloped in controversy after calling the Obama administration “vile” and evil” — saying, “If Barack Obama becomes the president in November again, I will either be dead or in jail by this time next year.” Despite confirmation that the Secret Service is looking into the threat (as they do all threats to the president), and the Romney campaign saying “divisive language is offensive,” Nugent stands by his words.

“I’m a black Jew at a Nazi-Klan rally,” he said. “And there are some power-abusing, corrupt monsters in our federal government that despise me because I have the audacity to speak the truth.”

He went on to add: “I spoke at the NRA and will stand by my speech. It’s 100 percent positive. It’s about we the people taking back our American dream from the corrupt monsters in the federal government under this administration, the communist czars he has appointed.”