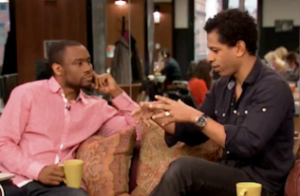 With Tamron Hall on NewsNation, Al Sharpton on PoliticsNation and Melissa Harris-Perry on weekend mornings, MSNBC is one of the more racially diverse cable networks on television. But that diversity does not extend to the network’s primetime lineup. HuffPost Live’s Marc Lamont Hill asked another one of MSNBC’s African-American hosts, Touré, to offer his insight on why that might be.

“How come there are no black people hosting at night?” Hill began his interview, eliciting a hearty laugh from Touré.

Touré immediately began defending the network by pointing out that there are only three primetime hosts, giving a brief summary of MSNBC’s relatively short history. He said he can “absolutely” see the network installing a black host in primetime. “We have an openly gay woman at 9 o’clock,” he added as evidence of the network’s “liberal” and “open” outlook.

“If you were able to say to me that there is a person in one of those three slots who is not brilliant … then you can say something, but we have three extraordinary people,” he said. When Hill brought up Chris Hayes‘ low ratings out of the gate, Touré essentially blamed that fact on competition from HLN, which is benefiting immensely from non-stop Jodi Arias trial coverage.

When Touré said he wants to see more people of color in primetime, Hill suggested that Touré could be the man for the job. “You could do 8 o’clock,” Hill said, “because a lot of people hate you. That’s all it takes.”