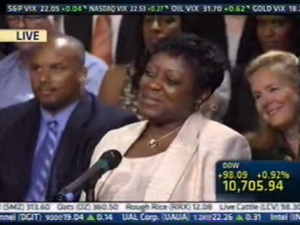 Investing In America: A CNBC Town Hall Event With President Obama, aired earlier today on CNBC, and didn’t just feature lively repartee, it looks like it launched a new viral video star. Right-of-center Internet outlets were abuzz with video of an unidentified woman who described herself as a one of “your middle-class Americans” and addressed President Obama by saying she is “exhausted of defending you, defending your administration, defending the man for change I voted for, and deeply disappointed with where we are right now.”

Almost immediately video of her questions showed up across the Internet, the entirety of the change can be seen below.

A full transcript of the exchange follows, but in the following clip you can see the exasperation in the face of the woman as she respectfully addresses the President. For his part, Obama takes the critical question in stride, and chooses not to get defensive, rather disarming the potentially tense situation with humor. He ends up listing a litany of accomplishments, which ends up being another showcase of his wonkery – meaning, issues oriented critics will be satisfied, but those who are angry and emotional will write his response off as being robotic.

Update – the Video editor at RealClearPolitics has informed us that the follow up to the audience member’s question was linked to within the post. This entry has been updated accordingly.

AUDIENCE MEMBER: Thank you very much. And quite frankly, good afternoon, President Obama. I’m deeply honored to be in this forum and so grateful for CNBC for making the forum available so you can speak to American citizens just like myself. I’m a chief financial officer for a veterans service organization and that’s here in Washington. I’m also a mother, I’m a wife, I’m an American veteran, and I’m one of your middle-class Americans.

Quite frankly, I’m exhausted. Exhausted of defending you, defending your administration, defending the man for change I voted for, and deeply disappointed with where we are right now. I’ve been told that I voted for a man who said he was going to change things in a meaningful way for the middle class. I’m one of those people and I’m waiting, sir, I’m waiting. I don’t feel it yet. While I thought it wouldn’t be a great measure, I would feel it in some small measure. I have two children in private school, and the financial recession has taken an enormous toll on my family. My husband and I joked that we thought we were well beyond the hot dogs and beans era of our lives. And quite frankly, it’s starting to knock on our door and ring through that that might be where we’re headed.

And quite frankly, Mr. President, I need you to answer honestly, is this my new reality?

PRESIDENT OBAMA: First of all, I think you describe exactly what is the bedrock of America. A veteran who is working for veterans, somebody who is a CFO, and I am sure knows how to manage their money, has made good decisions. I’m not saying once in a while you don’t want to get a new pair of shoes.

So the life you describe, one of responsibility, looking after your family, contributing back to your community, that’s what we want to reward.

Now, as I said before, times are tough for everybody right now. So I understand your frustration. But I would just — when you say there are things that you would like to see happen or you’re hoping to see happen that haven’t happened yet, let me give you a couple of examples. I, right now, have two children — sounds like you’ve got kids as well.

PRESIDENT OBAMA: Part of what we did over the last year and a half is make sure that billions of dollars that were going to subsidize financial service industries under the federal student loan programs are now going to be going directly to students so that millions more students are going to be able to get loans and grants and similar scholarships to go to college.

Now that’s going to have an impact on a whole bunch of kids out there, including maybe yours.

If you have a credit card, which I assume you do.

PRESIDENT OBAMA: See, now you’re showing how responsible you are. But if you have a mortgage or a credit card or any kind of financial dealings out there, as a consequence of the changes we made, the credit card companies can’t increase your interest rate without notifying you and they can’t increase your interest rate on your previous balances. In terms of getting a mortgage, you can’t have a mortgage broker steer you to a mortgage that ultimately is going to cost you more money because maybe they’re getting a financial incentive to do so. Those things are now against the law.

So there are a whole host of protections in there.

You are a parent who has children. If your child, heaven forbid, had a pre-existing condition, before I took office you were out of luck in terms of being able to get health insurance for that child.

So there are a whole host of things that we’ve put in place that do make your life better. But, the bottom line is, if your 401(k) is still down substantially from where it was a while back, if you haven’t seen a raise in a long time, if your home value went down, depending on where you live, all those things still make you feel like, gosh, I’m treading water.

And so my goal here is not to try to convince you that everything’s where it needs to be. It’s not. That’s why I ran for president. But what I am saying is that we’re moving in the right direction. And if we are able to keep our eye on our long-term goal, which is making sure that every family out there, if they’re middle class, that they can, you know, pay their bills, have the security of health insurance, retire with dignity and respect, send their kids to college, if they’re not yet in the middle class, but there are ladders there to get into the middle class if people work hard, get an education and apply their selves, that’s our goal, that’s the America we believe in, and I believe we are on track to do that.