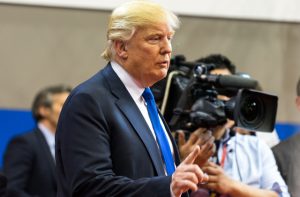 On Saturday, Politico reported that President Donald Trump had chosen to respond to allegations that he groped a female contestant during the production of The Apprentice by claiming “presidential immunity.” Trump has gone this route in response to numerous lawsuits in the six months that he’s been in office, but never has his attempt to use this privilege to escape consequences for his behavior been so jarring.

Of course, according to the 1997 ruling in Clinton v. Jones, a case involving then-president Bill Clinton and former Arkansas state employee Paula Jones, the president is not immune from court proceedings while in office.

Still, Trump attempting to abuse the power of his office to skirt sexually-charged accusations is particularly disturbing, nonetheless, because it epitomizes the disproportionate, gendered power dynamics that often emerge in rape and sexual assault cases. Sexual assault and domestic violence affect men and women alike, but female survivors are too often placed in the unenviable position of having to accuse wealthy and powerful men. When it comes down to a credibility contest or who has more money and resources as it so often does, women who have been victimized by powerful men often have few options save to disappear.

The testimonies of a dozen women on the campaign trail that Trump harassed or assaulted them clearly haven’t done the president any harm — he quite literally went on to become president. Because apparently, these days, “when you’re a star, [voters] let you do it.”

This is, of course, the very phenomenon that allowed Bill Cosby to escape dozens upon dozens of allegations of sexual abuse unscathed for decades, and it’s hardly exclusive to America. Around the globe, powerful men — even those who can’t cite presidential immunity — are consistently escaping the consequences for their actions and getting away with all kinds of gendered, sexual abuse.

“Statements made in that context are properly viewed by courts as part of the expected fiery rhetoric, hyperbole and opinion,” Marc Kasowitz, who is also handling all Russia-related allegations against Trump, wrote in a memo. Accusations that female victims of domestic abuse are exaggerating or outright lying are all too commonplace, and it certainly doesn’t help the national dialogue around sexual assault when these accusations are coming from the president of the United States.

At any rate, Summer Zervos is fully aware that her case isn’t just about rape culture or gender dynamics — it’s also about the scope of presidential power, and demanding accountability from powerful men.

“Precisely because Defendant’s underlying tortious behavior has nothing to do with his current duties or office, and because it occurred before he took that office, he does not have immunity from suit,” Zervos’s attorneys wrote. “No person is above the law in this country and that includes the President of the United States.”