Trump Continues Feud With John Lewis, Calls Him Out For Boycotting Bush Inauguration

Trump Continues Feud With John Lewis, Calls Him Out For Boycotting Bush Inauguration 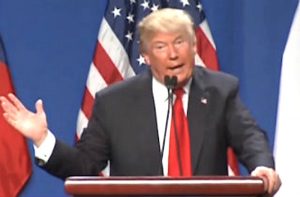 Three days ahead of the inauguration of President-elect Donald Trump, the incoming POTUS has decided to keep taking shots at civil rights hero John Lewis, especially since Lewis’ decision to boycott the inauguration has created a snowballing effect among Democrats. At this point, dozens of Democrats in Congress have publicly stated they will not attend.

Following a weekend where Trump took a number of shots at Lewis on Twitter after the Democratic Congressman said he wasn’t a “legitimate president,” the soon-to-be Commander-in-Chief called Lewis out on a statement he made in his interview with MSNBC’s Chuck Todd.

John Lewis said about my inauguration, "It will be the first one that I've missed." WRONG (or lie)! He boycotted Bush 43 also because he…

"thought it would be hypocritical to attend Bush's swearing-in….he doesn't believe Bush is the true elected president." Sound familiar! WP

Trump is apparently referencing a 2001 Washington Post article that details how Lewis and a number of Democrats decided to skip George W. Bush’s inauguration that year. In the piece, WaPo noted that Lewis spent the day in his district and pointed to Bush’s contested election victory as the main reason.

Some members of the Black Caucus decided to boycott Inauguration Day; John Lewis, for instance, spent the day in his Atlanta district. He thought it would be hypocritical to attend Bush’s swearing-in because he doesn’t believe Bush is the true elected president.

During his MSNBC interview where he announced his boycott, Lewis told Todd that this would be the first inauguration he wouldn’t be attending as a member of Congress.