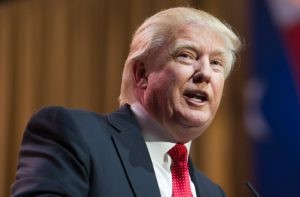 In an important op-ed published last week in USA Today, the Center for Reproductive Rights’ Nancy Northup pointed out a crushing reality: the Trump-era of “alternative facts” have fundamentally changed the dialogue around abortion rights for years to come.

Around the anniversary of the Supreme Court’s Whole Women’s Health v. Hellerstedt ruling, in which the Supreme Court found that medically unnecessary and expensive laws based on the debunked theory that abortion is a dangerous procedure and clinics offering it must function as hospitals solely served to shut clinics down, Northrup reminds us that the ruling was far from a cure-all — especially with President Donald Trump poised to likely appoint at least one more justice in his term.

“Imagine going to your doctor about one of the most important decisions you’ll ever make. Imagine your doctor’s response is to lie to you. …

[M]any doctors are forced to lie to their patients today precisely because the law requires that they do so.

Long before the 2016 Whole Women’s Health ruling, there was Roe v. Wade, which not only gave women the right to make choices about their bodies and pregnancies, but also ultimately gave them the right to make informed choices. And as Northup has pointed out, state funded, required propaganda and “alternative facts” are effectively preying on vulnerable pregnant women and infringing on this right.

The debate around abortion rights is slowly but surely shifting from one of morality to one around objective facts.

Don’t get me wrong — there will always be anti-abortion lawmakers and protesters waving around the “abortion is baby-killing!” flag. But in recent years, anti-abortion lawmakers have found that laws feigning concern and support for women having abortions by calling for medically unnecessary restrictions on abortion to “keep women safe” and requiring women to be given additional “facts” about abortion ahead of the procedure, have been far more successful.

House Bill 2, the Texas law that sparked the Whole Women’s Health case in the first place, operated on the premise that abortion is a dangerous procedure, when studies by medical experts consistently reveal that it is as or more safe than plenty of other common procedures that aren’t restricted anywhere near as heavily as abortion is. Abortion is leagues and bounds safer than giving birth — women are 14 times more likely to die in childbirth than from having an abortion.

And yet, despite operating wholly on a discredited lie, House Bill 2 caused more than half of Texas’ already sparse abortion clinics to shut down. It required clinics offering abortion services to essentially function as hospitals and meet all of their expensive requirements. Severely lacking funding, this caused many to shut down between 2013 and 2016, and this appears to have caused a shocking trend in attempted self-terminations.

The age of Donald Trump is a post-fact one. It’s one in which Sean Spicer and Kellyanne Conway can lie without blinking about inaugural crowd sizes to flatter a 71-year-old child’s ego. It’s one in which Trump can call Mexican immigrants rapists and killers without any basis for these claims, one in which religious zealots like Vice President Mike Pence can fund “gay conversion therapy” and tout homosexuality as a twisted, perverted choice.

And in the world of reproductive rights, it’s one in which exploiting and deceiving vulnerable, often low-income women with false science and manipulative laws has become the name of the game for abortion opponents.

“Anti-choice activists and lawmakers have been peddling alternative facts since long before it became a catch-phrase,” Northup writes. “The list of lies is long, and in many cases legislators have used them to justify more than 330 laws in the last five years that restrict the rights of millions.”

Additionally, Northup points out how our president has gone so far as to censor global organizations from even talking about abortion rights, ” on pain of losing funding for non-abortion services like maternal health care and STD testing.”

She continues, “More recently, he signed an executive order that moved toward allowing employers and insurers to deny women coverage for  birth control. And he appointed Charmaine Yeost and Teresa Manning — both former staffers for anti-abortion organizations that often rely on junk science to push through restrictions on women’s reproductive health care — to jobs at the Department of Health and Human Services.”

Looking forward, Northup sees one potential solution  — taking the battle to courtrooms, the “one place where facts still matter.” Every few years, one Supreme Court case makes or breaks reproductive rights for years to come. With Trump and his hostility toward the procedure now wielding stunning power over the Supreme Court, there’s no telling what this could mean for the movement.