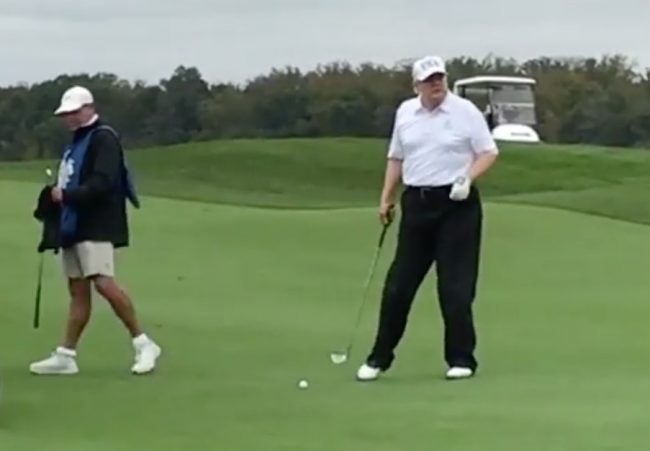 During the 2016 presidential campaign, then-candidate Donald Trump told voters that he wouldn’t have time for golf if he were elected president. And while Barack Obama was POTUS, Trump regularly criticized Obama for golfing, arguing that the then-president was hitting the links too often.

I guess that was then and this is now.

Sunday represented the fifth consecutive day that the president has visited a golf club and the 81st trip to a course since he became president.

Per pool, Trump arrived at Trump International Golf Club in West Palm Beach at 9:33AM.

This is his 81st day at a golf club, 103rd day at a Trump property as president.

This is Trump’s fifth consecutive day visiting one of his golf clubs.

For comparison’s sake, at this point in his presidency, Obama had played 26 rounds of golf, according to CBS News’ Mark Knoller. So, yeah, during the 10+ months of their respective presidencies, Trump has visited a golf course three times more than Obama did.

Over the course of his entire presidency, Obama golfed a total of 333 times, which averages out to a little more than 40 times a year. In Obama’s final full year in office, he took to the links 64 times, according to Knoller.

George W. Bush only played 24 rounds of golf during his entire presidency and didn’t hit any courses after October 2003 following criticism that he was golfing while a war was ongoing.