Well, this is awkward.

However, in a story on FoxNews.com, it was noted that a couple of other long-living former presidents both died while they were 93.

And here’s a screengrab of the article: 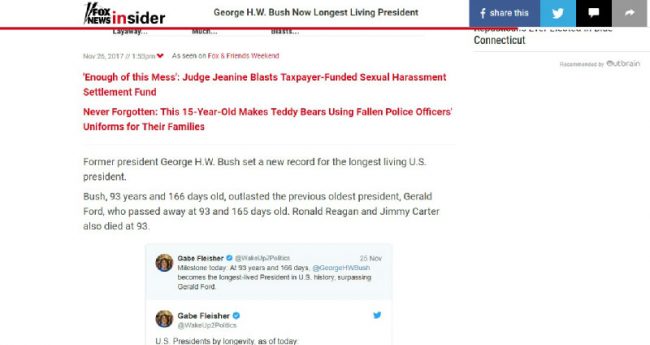 Umm, yeah. Jimmy Carter is not dead. He is very much alive.

As of the time of this publication, the embarrassing error was still up on the site. A number of media folks took notice and publicly called out Fox News on Twitter:

Um, yeah, @FoxNews. Jimmy Carter is still very much alive despite what is reported in this article. https://t.co/dczgoNA2ul

Jimmy Carter died at 93? Are you sure @FoxNews ? ? pic.twitter.com/ziz3xQhAz3

How is this article still up on your website @FoxNews?!?! It says Jimmy Carter is dead. HE IS NOT! This is pretty humiliating for a news organization. Everyone makes mistakes, but this has been online for more than an hour!!! https://t.co/R9tuNORBNS

Fox News has had a story up for more than an hour that incorrectly says Jimmy Carter is dead. https://t.co/I9y1FyoAzh

One would think that eventually, someone somewhere at the site will notice this incorrect fact in the story and get it fixed.

UPDATE 3:36 PM ET: The FoxNews.com article has now been corrected.