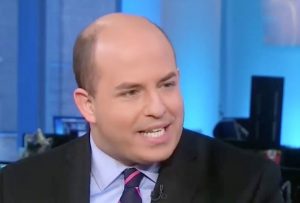 CNN’s reporters are a united front against the scourge of “fake news.”

Over the weekend, a man who believed conspiracy theories that a Democrat-led child sex trafficking ring was headquartered out of a D.C. pizzeria took a gun to the restaurant and decided to investigate for himself. He has been widely condemned, but some public figures have defended the theory, insisting that until it is proven false, it must be believed. First, CNN’s Jake Tapper pushed back forcefully via Twitter DM. Then, Brian Stelter joined Ana Cabrera live to talk about the real-world consequences of allowing fake news to flourish.

Dismantling fake news culture has been a staple in Stelter’s reporting for weeks now. He’s lead the charge against it, encouraging readers to “triple check” their sources before sharing any information on social media.

Today, he took it a step further. He condemned the idea that a theory or story should be believed until disproven, calling it a “strange path to go down.” Then, he talked about how, exactly, fake news came to be so prominent.

First, Cabrera asked, “Depending on who is peddling this fake news does matter. When it’s somebody in a very high-profile position — even President-elect Donald Trump has been known to peddle some conspiracy theories — then others don’t know necessarily who to believe and as media, we have responsibility to call a spade a spade, to point out when something is fake, but is that enough?”

Stelter then pointed out that President-elect Donald Trump doesn’t just peddle conspiracy theories, but has sent out links to numerous fake news articles. (That can now easily be proven thanks to a convenient chart provided by Buzzfeed, which lists every site Trump has ever linked to on social media.)

“President-elect Trump is many things,” Stelter went on. “To his supporters, he is a beloved figure. One of the things he is is a conspiracy theorist.”

He did say it has been about a week since he tweeted something “clearly false.” Still, General Michael Flynn‘s son is tweeting about the so-called “Pizza Gate” scandal proves that even when Trump isn’t sending out misinformation, the people in his orbit still are.