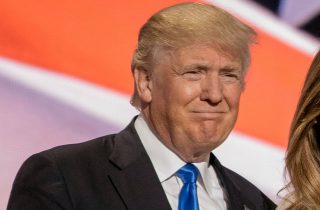 Lost amid a lot of the clammer and bombshells, however, was a curious nugget when the president waded into world history. When reporters asked about his recent trip to Paris, Trump digressed into some analysis of European military history, reflecting on the doomed forays of Napoleon and Hitler into Russia.

The historiography appears to have been sparked by Trump’s visit to Napoleon’s tomb in Paris with French President Emmanuel Macron.

“They froze to death. How many times has Russia been saved by the weather?” Trump remarked. “Same thing happened to Hitler.”

TRUMP: Well, Napoleon finished a little bit bad. But I asked that. So I asked the president, so what about Napoleon? He said: “No, no, no. What he did was incredible. He designed Paris.” [garbled] The street grid, the way they work, you know, the spokes. He did so many things even beyond. And his one problem is he didn’t go to Russia that night because he had extracurricular activities, and they froze to death. How many times has Russia been saved by the weather? [garbled]

But the Russians have great fighters in the cold. They use the cold to their advantage. I mean, they’ve won five wars where the armies that went against them froze to death. [crosstalk] It’s pretty amazing.

So, we’re having a good time. The economy is doing great.

As you can see, the digression was temporary and the president quickly moved on to the economy.

Trump’s interview with the New York Times landed with an explosion last night. Among the many revelations were Trump’s admission that he would not have appointed Jeff Sessions if he knew he would recuse himself on Russia, he still hates James Comey, and he is following the Robert Mueller investigation very, very closely.