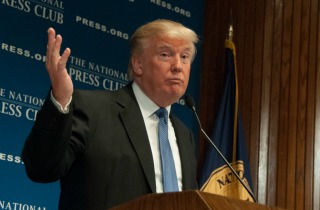 “WSJ reports that GOP getting ready to treat me unfairly — big spending planned against me,” Trump tweeted Monday afternoon, tagging the official RNC Twitter account. “That wasn’t the deal!”

The business magnate was likely referring to a Wall Street Journal report which outlined Republican strategist Liz Mair‘s plan for a “guerrilla campaign” with the goal of “defeat[ing] and destroy[ing]” Trump’s candidacy. A super PAC supporting Ohio Gov. John Kasich (R) began rolling out a series of attack ads targeting the GOP frontrunner, and other groups, including the Club for Growth, are joining the effort, monikered “Trump Card LLC.”

While Mair is not aligned with the RNC — as Trump seems to suggest in his tweet — she is the party’s former online communications director.

The initiative represents “the first attempt to unite donors from rival camps into a single anti-Trump force,” according to the WSJ report. Those who are part of the effort believe that Trump will secure the GOP nomination “unless something dramatic and unconventional is done.”

When announcing that he had signed the contract on Sep. 3, Trump said he would be “totally pledging [his] allegiance to the Republican Party.” The contract stipulated that Trump would not only support the eventual nominee, but would also not mount a third party bid.

“I see no circumstances in which I would tear up that pledge,” he added at the time, cautioning that the GOP must treat him fairly during the campaign.

If Trump decides to run as an independent, he would likely take away a large chunk of support from the eventual Republican nominee, virtually ensuring that a Democrat would be elected to the Oval Office in 2016.