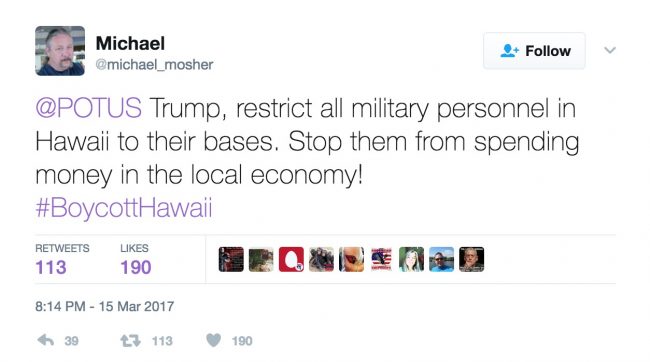 Twitter accounts that heavily promote Donald Trump are responsible for the #BoycottHawaii trend.

A federal judge in Hawaii issued an order Wednesday afternoon blocking several key portions of Donald Trump’s new travel ban just hours before it was set to take effect at midnight, according to our friends at LawNewz. That seems to have made some Twitter users angry. (We say ‘seems to’ because it’s honestly difficult to determine the level of sincerity held by the operators of these accounts. Scrolling their timelines, it tends to be more plausible that some of them are running a long-sighted trolling attempt than that they are genuinely tweeting about what they perceive as Trump’s greatness every few seconds.)

Recall that when the cast of Broadway’s mega-hit Hamilton upset Trump’s Twitter fans by speaking to Mike Pence after a show, the users responded with a call to boycott that, too. Also recall that it’s highly unlikely that any of them had access to tickets in the first place, as many people wait over a year for the chance to see the musical. At least when they boycotted Kellogg’s for refusing to advertise on Breitbart, it was reasonable to assume that some actually had Raisin Bran in their homes.

Anyway, a bunch of people have been insisting that though they had tickets to Hawaii, they aren’t going now. Others have been asking Trump to keep military personnel on base arrest or conflating the issue of taking in refugees with supporting undocumented immigrants.

#BoycottHawaii I was taking my kids & Grandkids to Hawaii. We just cancelled @gohawaii your Judge threatens our safety.

Let’s see if liberal judicial ideology is more important than tourist revenues to the state of Hawaii.#boycotthawaii

#DumpHawaii I guess we won’t be going back there this summer Since Hawaii supports terrorist over American #BoycottHawaii https://t.co/H51tSU3nXL

#boycottHawaii I was saving for Hawaii & will now switch to Caribbean! You thought you’d suffer loss of 100 ppl with #EO just wait! https://t.co/GZ9aIIckPe

Family was planning trip next year to Hawaii, We can find a much better place I’m sure. #BoycottHawaii https://t.co/VvZKoisXfW

@POTUS Trump, restrict all military personnel in Hawaii to their bases. Stop them from spending money in the local economy!#BoycottHawaii

General reactions have been strong, too.

When #BoycottHawaii trends but then u find out its just pressed haoles cancelling their summer vacations with Billy and Samantha pic.twitter.com/JIVZZFDKAX

#BoycottHawaii WE DIDNT WANT YOU COMING HERE IN THE FIRST PLACE?? WHILE UR AT IT, HOW BOUT GIVING US SOME OF OUR SOVEREIGNTY BACK? MAHALO!

#boycotthawaii !! Nobody wanted you haoles trashing the beaches and destroying sacred land for the “cute vacay pics” anyways. Stay out.??

Lmao #BoycottHawaii. From the people who tried to boycott a sold-out hit musical and one of the most successful coffee chains in the world.

I’m seeing deplorables saying they will #BoycottHawaii and come to Florida. We don’t want you domestic terrorists here either.

#BoycottHawaii good you would hate it here. Whites are a minority, the food isnt just chicken or steak, & we integrated many CULTURES

Another day, another boycott.