Trump’s All-Caps OANN Tweet May Be His Most Telling Yet, and No One Seems to Care 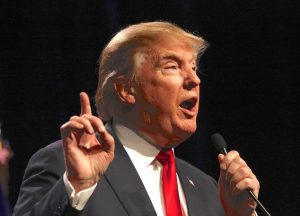 One of the most dangerous elements of the coming presidency of Donald Trump is that he has completely desensitized us to our normal impulses before he has even officially taken office. There is no better indication of this phenomenon than his infamous Twitter account in general and one tweet in particular from today.

While his predictable condemnation of Democratic Congressman John Lewis claiming Trump is not a “legitimate” president has gotten most of the attention on this Martin Luther King holiday weekend, I’m referring to another tweet from the president-elect. This one was a response to the ongoing controversy over the Trump/Russia dossier which has dominated the news for the past several days.

In my view, it would be difficult for one sentence to be more telling/damning to an incoming president than this one: 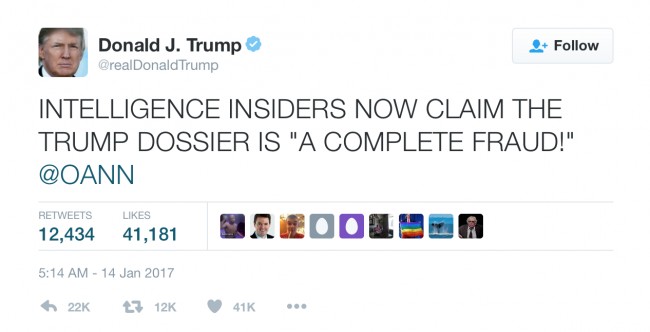 Let’s break this down. First, the president-elect of the United States is tweeting in all capital letters. This is something that when done by an unknown person with an egg avatar usually results in an instant blocking/muting because it is assumed that they are at least partially nuts. For Trump to do this it must mean that the subject is REALLY important and that he is VERY confident in the truth of what he is saying. This means that its substance should be prone to even greater scrutiny.

Secondly, in the tweet he cites a One America News Network “report,” but there are multiple problems with this. One America News (on which I have appeared multiple times) is a complete joke. It is a tiny network based in a very small office building off a highway outside of San Diego. It has literally no “news” department from which to generate any legitimate original reporting.

OANN, which just hired former Trump campaign manager Corey Lewandowski, is very clearly attempting to make a name for itself by being the most pro-Trump outlet in the land (which is about as difficult a task as being the most obvious sycophant at an Oscar winner’s post-ceremony party) and nothing they say about him should be taken at face value by anyone. But in this particular case, Trump citing them is even more bizarre and lacking in credibility than it normally would be.

It isn’t even clear from the tweet what exactly Trump was referring to when he claiming (again, in all caps!) that “Intelligence Insiders” are saying that the dossier is a “complete fraud,” because OANN didn’t even “report” that. OANN itself tweeted out Trump’s original tweet along with a link to a commentary by their host Liz Wheeler. Not only is the video a pure opinion-piece (one with numerous highly questionable conclusions) rather than a news report, but nowhere in there is even a reference to what was in the Trump tweet.

Wheeler, who does an amazing and I’m sure completely coincidental impression of former OANN host Tomi Lahren, never even mentions the words “Intelligence Insiders” or “complete fraud” in the clip. The entire video is simply her opinion, which was obviously crafted (quite successfully) to appeal to the new King and his cult-like band of loyal subjects. If an actual report with real news reporting exists from OANN, you would think that they would have made that public given Trump’s very high-profile tweet, but they did not because, get this, Trump tagged the wrong outlet!

It turns out that The Daily Caller (founded by newly-minted Trump fanboy Tucker Carlson, for whom I wrote back when he was a conservative) ran a piece which DOES match Trump’s tweet. While the DC story is interesting, it’s hardly definitive and is actually itself contradictory (if the dossier is a “complete fraud” or “fake,” as opposed to just being incorrect, then it couldn’t have been written by Christopher Steele).

Thirdly, and most importantly, is the problem of why Trump needs to be relying on OANN, the Daily Caller, or anyone else for that matter, for their conclusions about whether the dossier is a “complete fraud.” Obviously, given the highly personal nature of the allegations, if he would know better than anyone on the planet if there was absolutely no truth to what was in what is now known as the “BuzzFeed memo.” This feels like an accused criminal citing comments from his own lawyers as proof he didn’t commit the crime.

Not only that, but we now know Trump was briefed on the contents of the memo by the very highest levels of our intelligence community (including by an FBI director who played a key role in his election victory). Why in the world would an incoming president give so much credibility to flimsy reports when he has access to FAR better information than they do?

The most logical “Occam’s Razor” answer to that question is that Trump is extremely worried about the dossier story and is desperately latching on to anything he can in order to have at least his base of fervent supporters believe that this story is totally “fake news.” It also appears to be a classic case of suspiciously protesting too much.

While Trump’s bizarre and over-the-top response hardly proves that there is anything truthful in the dossier, it seems to me to be far more consistent with there being at least some real fire there than with it really being a “complete fraud.” If it really was a “complete fraud,” he would know that for sure and not be so incredibly insecure about the subject that he would need to tweet deceptively about questionable reports, in all capital letters.

When this story broke I was pretty convinced that most, if not all, of what was in the dossier was greatly exaggerated or flat out false. But after the developments since then, specifically Kellyanne Conway’s pathetic performance on CNN, and now this very telling Trump tweet, I’m starting to think that there is probably something very real in there.

At the very least, considering that Trump is by far Twitter’s most prominent user, perhaps he ought to at least learn how to tag the correct media outlet.