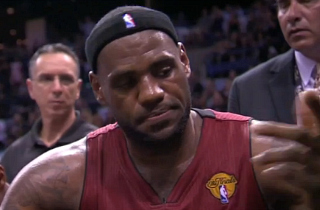 You know that controversial NBA game last night more than a few water coolers are privy to this morning?

You know…the one where the most talented basketball player in the world went down with massive cramps at a critical junction and the home team went on a huge run to put the game away with said player on the bench?

The one played in an arena where the air conditioning went out due to an electrical failure, turning the court in a 90-degree sauna, resulting in said cramps for one LeBron James?

It should have never been played from the start.

But thanks to the almighty power of television, ad revenue and ratings, nothing short of a natural catastrophe was going to stop Game 1 of the NBA Finals between the Miami Heat and San Antonio Spurs from being played on a Thursday night. Why? Because Thursday is a much bigger viewing night for folks at home than Friday, the night the game could have been postponed to while the air conditioning situation was resolved (Game 2 isn’t until Sunday evening, leaving the window open for a Friday Game 1). And in the all-important key demo advertisers covet, Thursday is famous for its large share of young, affluent viewers that watch TV on this night more than any other. Friday? Please. That usually is the least-watched TV night of the week.

Remember, basketball ain’t football. Conditions need to be optimum or the outcome is compromised, as was obviously the case last night (and I’m a Nets fan, so don’t bother making me a Heat-homer). Again, the temperature on the court was 90 degrees with no breeze and 19,000 sweaty fans in the stands. Consequently, the most popular athlete on the planet suffered severe cramping during a key part of the game to the point he couldn’t even walk…all for a huge audience to witness. And despite what the usual suspects are saying on Twitter, LeBron James plays through almost anything, so let’s not even bother questioning his toughness (“LeBron can’t take the heat” might as well have been trending last night). As ESPN’s Stuart Scott tweeted, cramps to the extent LeBron suffered have zero to do with desire. This was an unnecessary but legitimate injury.

Of course, the A/C outage continues a strange pattern recently of technical failures during the world’s biggest events: The Super Bowl in 2013 in New Orleans and the 34-minute power outage there. Or one of the Olympic rings not lighting up during opening ceremonies at the 2014 Winter Games in Sochi. Hell, even a snake was found in the Trailblazers locker room earlier in these playoffs before a game. The venue? San Antonio’s AT&T Center, of course.

For those who remember the Lakers-Celtics June classics in the 80s, those games—at least the ones at old Boston Garden—were also played without air conditioning (because the Garden didn’t have that capability at all). 97 degrees was the official game-time temperature on the floor for Game 4 of the ’84 series thanks to an insane heat wave that hit Boston that day. So should a game that was played 30 years ago in an arena no longer in existence serve as a precedent in 2014?

Game 1 of the NBA Finals saw the Spurs pull away late for a 110-95 victory over the two-time defending champion Heat, who coincidentally were without the best player for about the final six minutes of the game when it was still close. If the Spurs end up winning this in 7–and they should have beaten the Heat last year if not for a missed free throw to clinch the series at the end of Game 6–many will point to Game 1 and the A/C debacle as the reason why, which is completely unfair to San Antonio.

Again, why should either team be forced to play in conditions that did not exist for the other 95 games or so each played during the regular season and playoffs? Why compromise the integrity of a championship series like that?

In a related story, the team says the arena will be sufficiently cool by Game 2 on Sunday night.

But the real loser here is the NBA for allowing this spectacle to happen on its biggest stage.

We have television and the horrifying prospect of a Friday night telecast to thank for that.