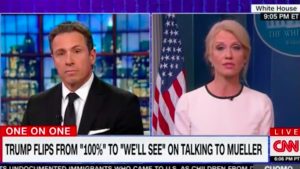 In what was only Chris Cuomo’s 2nd episode of Cuomo Primetime, the anchor faced off with White House official Kellyanne Conway and things went about as expected.

Whether it was Conway saying “Be an apple, don’t be a banana” or her claim that “nobody here talks about Hillary Clinton,” things definitely weren’t boring.

Here are the best Twitter reactions to the completely bonkers interview:

Underrated part of this @ChrisCuomo–@KellyannePolls interview: She keeps referring to him as “Christopher.”

Me? Every single time I hear Kellyanne Conway speak. pic.twitter.com/aCUovqTIxW

The definition of insanity is Chris Cuomo interviewing Kellyanne Conway and expecting a different result other than Kellyanne saying ridiculous things.

“We have to come together. He is unifying this country.” Kellyanne Conway pic.twitter.com/YqSUExZtFm

I feel exhausted. And I didn’t interview @KellyannePolls. I just watched @ChrisCuomo do it.

Kellyanne Conway told CNN’s @ChrisCuomo: “We don’t care about her. Nobody here talks about Hillary Clinton.”

… in case you were curious, Trump has tweeted Hillary Clinton’s name at least 89 times since election day. Here are some of those tweets.? pic.twitter.com/0lhtoe4thR

And finally Cuomo himself gave a review of the interview: