The lieutenant governor of Texas, Dan Patrick, a very religious man with some strong conservative social views raised a lot of eyebrows with a tweet that people found to be in bad taste after the Orlando shooting. 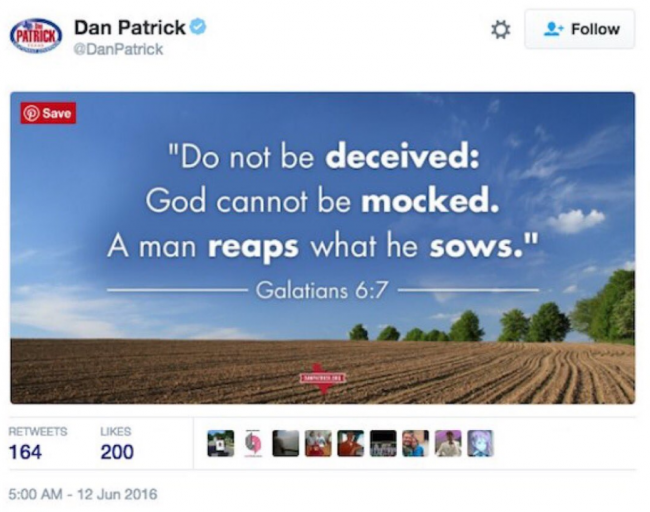 The avalanche of fury followed:

@DanPatrick You are a disgrace to Texas. Yes, I am Republican. Yes, I voted for you. yes, I'm Christian. Never get my vote again.

@DanPatrick You pervert Christianity in a way that would make Jesus cringe. Where is your compassion?

@DanPatrick HAVE YOU NO SHAME

TX Lt. Governor @DanPatrick, you are a disgrace to your state in this time of national sorrow. You should resign. https://t.co/zOD2oi1XWD

.@danpatrick Your actions, speaking intolerance and hatred in the face of terror and tragedy, are unconscionable. https://t.co/lEXiL1sRwW

you're a governor @DanPatrick and you tweet this as news of a mass shooting in Orlando breaks? absolutely disgusting pic.twitter.com/INMA0MQ7MH

Well, Patrick’s office issued this statement insisting the photo was not related to the shooting:

In full statement, @DanPatrick says he "regrets the unfortunate timing" of his tweet. #txlege #pulseshooting pic.twitter.com/QXJccvR4Kd