Twitter Is for Old People! And Other Thoughts from the Future

Twitter Is for Old People! And Other Thoughts from the Future 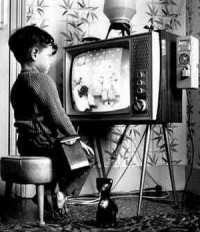 For reasons which still remain somewhat unclear, a 15-year-old intern at the Morgan Stanley offices in London has become the voice of his generation regarding social media.

After two weeks in the office Matthew Robson, who ostensibly landed his post because his dog was friends with the dog of a senior financial analyst at Morgan Stanley, penned a report called “How Teenagers Consume Media.” Which was very smart, because what do profit-minded adults want to know more than anything? What teenagers think! Needless to say, corner office occupants worldwide ate it up.

So what earth shattering things did he have to say? What it appears to boil down to is that Twitter is for old people. International panic over this disclosure has ensued…despite the fact Twitter has no way to make a profit yet. DOES USING TWITTER MEAN YOU ARE AN OLD PERSON? Is pretty much what the report got distilled down to in the minds of people who pay attention to these sorts of things. You can imagine how those savvy over 30 twitterers who thought they were ahead of the game felt upon reading that!

Robson also notes that kids don’t listen to the radio or pay for music. (If you didn’t already know this you are probably someone who still listens to the radio and shops for CDs.) Also, along with just about everyone else under the age of forty* teenagers don’t read newspapers.

Anyway here’s what he had to say about Twitter that apparently rocked the media globe:

He told The Times that at home he usually communicates with his male friends while blowing up terrorists on the action game Call of Duty. “You use a mobile phone if you want to talk to girls,” he said, as “only about one in fifty girls plays computer games.”

Girls are a lot more prone to spend their time on social networking sites. Matthew uses Facebook but his accounts with Piczo and Bebo have lapsed and Twitter is strictly for the elderly. “It’s aimed at adults,” he said. “Stephen Fry is not particularly cool. Also, for the cost of one tweet you could send quite a few text messages.” As no teenagers followed each other’s profiles, tweeting was “pointless”.

Call us crazy, but the most disturbing part of that quote has nothing to do with Twitter.

Not being 15 we turned to our own genius Mediaite Interns (they of the same-named Twitter feed) to ask them their thoughts. They aren’t 15 either, by the way (their median age is 20), but they are a great deal closer to it than us! Here’s a summary:

• This sounds more apt for a hardcore gamer / loser than all 15-year-olds. While most aren’t crazy about calling on the phone, talking through your xbox requires all your friends to be logged in and in front of their tvs at all times.

• He’s British and they’re weird about cell phones. They were texting non-stop way before Americans (maybe they evolved beyond text updates before Twitter came along) and they do mostly pre-pay (that whole ‘credit’ thing he mentions). Unlike American kiddos who just text forever and then their parents hate them at the end of the month).

• This sounds a little extreme. Possible, but probably not representative. The Twitter comment, though, seems to be supported by market research – can’t speak to personal experience because I LOVE me some Twitter, but millennials generally don’t like Twitter. Its fastest growing demographic (and on FB too!) is older women. (NB We didn’t ask what qualified in their minds as “older” in this scenario).

There you have it folks, what the young people are actually thinking! That said, does anyone doubt that by the time this kid is old enough to drive Twitter probably will be a thing of the past? The future’s so bright, etc.

* This is based solely on results gleaned from a quick survey of our office and G-chat.