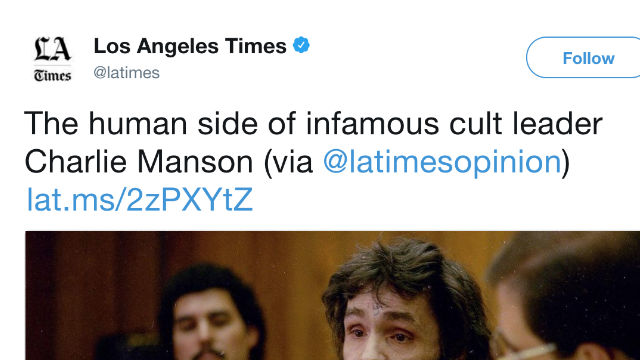 Hours after cult leader Charles Manson — the mastermind behind numerous gruesome murder sprees — died of natural causes at the age of 83, the Los Angeles Times ran an op-ed discussing the man’s “human side.”

“Manson, though, was no devil but a human being, as his death makes clear. I don’t say that to soften or absolve him. But I don’t believe in demons; people are frightening enough. Indeed, to accept Manson as a person, to see him through the filter of his humanity, is to acknowledge what we resist: that he was perhaps not so utterly different from the rest of us,” wrote LA Times contributing writer David Ulin.

Essentially, the op-ed writer was attempting to make the point that all evil people aren’t demons or supernatural creatures, but rather are human like the rest of us — which suggests we are capable of carrying out similar misdeeds.

However, Twitter didn’t take well to Ulin’s point, as the website — which is known for descending into outrage over poorly-worded headlines — heaped mockery and harshly-worded tweets at the article:

“to acknowledge what we resist: that he was perhaps not so utterly different from the rest of us.”

What a piece of shit this column is, @latimes.

La times wat are u doin he has a swastika tattooed on his forehead https://t.co/kc0gmdGQLB

There’s a human side? Wtf @latimes?

@latimes it seems like the insane murdering part of him was, unfortunately, quite human

I also hear Jeffrey Dahmer was a hell of a good cook https://t.co/mnoRVqMCuM

And worst headline for death of #CharlesManson goes to the @latimes https://t.co/yl5eNMb5iJ

On today’s episode of “White Privilege”, the LA Times attempts to humanize a white supremacist who orchestrated the brutal murders of 9 innocent people in 1969. https://t.co/SDpRI5u3Fb