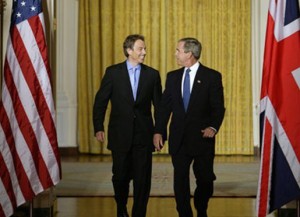 After seven years, John Chiclot unveiled a scathing report regarding the United Kingdom’s 2003 entry into the Iraq War.

Chiclot was appointed to lead an inquiry into the nation’s entry into the Iraq War in 2009 by then-PM Gordon Brown.

The report weighs in at a massive 12 volumes — the executive summary alone clocks in at around 150 pages.

The report provides fresh ammunition for critics of Blair, assiduously laying out the case that the PM capitulated utterly to George W. Bush and his administration’s timetable and march to war. “The timing of military action was entirely driven by the US Administration,” the report says.

At the point at which the UK government authorized military action, “the diplomatic options had not at that stage been exhausted,” according to the report.

The report concludes that the UK’s Joint Intelligence Committee (JIC) had determined prior to 2003 that there was “no intelligence of current co‑operation between Iraq and Al Qaida,” Saddam Hussein had limited capacity to carry out terrorist attacks, and Iraq did not possess WMDs — undermining the foundations of Blair’s argument to go to war.

“At no stage was the proposition that Iraq might no longer have chemical, biological or nuclear weapons or programmes identified and examined by either the JIC or the policy community,” the report says.

“It is now clear that policy on Iraq was made on the basis of flawed intelligence and assessments,” Chilcot said. “They were not challenged, and they should have been.”

[image: U.S. President George W. Bush and British Prime Minister Tony Blair walk through the Cross Hall of the White House before the start of their news conference, July 17, 2003. Via Wikicommons]