UMass RAs Declare Harambe Jokes a ‘Microaggression,’ Attack on Black Community
He didn't die for this

Students at the University of Massachusetts beware: making jokes about the death of Harambe the gorilla could be viewed as a “microaggression” and an attack on the campus African-American community.

In an email sent to residents of Sycamore Hall and posted to social media, two of the resident assistants warned about the obsessive Harambe jokes being written on whiteboards. “I understand that social media has been popularizing Harambe in some crude way, which may appear as funny to groups of people. However, these comments are not only derogatory, but also microaggressions to some UMass students,” fret the RAs. 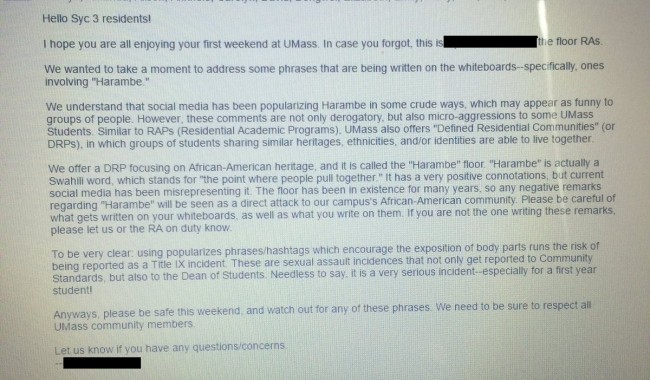 UMass offers “defined residential communities” (DRP), where students of the same race can all live together. “We offer a DRP focusing on African-American heritage, and it’s called the ‘Harambe’ floor,” the letter notes.

“’Harambe’ is actually a Swahili word, which stands for ‘the point where people pull together.’ It has very positive connotations, but recent social media has been misrepresenting it,” the RAs write. “The floor has been in existence for many years, so any negative remarks regarding Harambe will be seen as a direct attack to our campus’ African-American community.”

Of particular concern to the resident assistants is the Internet meme “dicks out for Harambe,” which they warn could be seen as sexual assault. “To be very clear, using popularizes [sic] phrases/hashtags which encourage the exposition of body parts runs the risk of being reported as a Title IX incident. These are sexual assault incidences that not only get reported to Community Standards, but also to the Dean of Students.”