UNC Admits to Enrolling Athletes in Fake Classes to Maintain GPAs, Allow Them to Play 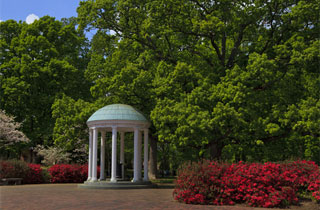 The University of North Carolina today released a damning report into its own academics, revealing that for two decades, two employees of the university ran completely non-existent classes for students — nearly half of them student athletes, directed there by college counselors — in order to inflate their grades.

It was well-known that the “paper classes” existed beforehand, and sparked a national scandal when they were revealed: some of the student players, recruited to bolster the University’s nationally-recognized (and lucrative) athletics department, could barely read at an elementary school level. (In contrast, the school admitted only 28% of applicants in 2014, and with pretty good SAT reading scores.)

But while the school admitted that they pointed student athletes towards easier classes, the report, written by an outside investigator, revealed something UNC wasn’t aware of: many of those classes, located in the African and Afro-American studies, didn’t actually exist. The New York Times detailed exactly how fake the classes were:

Some 3,100 students took the phantom classes, most of which were created and graded solely by a single university employee, Deborah Crowder, a nonacademic who worked as the department’s administrator and who told Mr. Wainstein she had been motivated by a desire to help struggling athletes. Over time, she was joined in the scheme by the chairman of the department, Julius Nyang’oro, who became the professor of record for many of the fake classes, although he generally left the details up to Ms. Crowder.

Ms. Crowder required that students turn in only a single paper, but the papers were often largely plagiarized or padded out with “fluff” like page after page of quotations, the report said. She generally gave the papers A’s or B’s after a cursory glance. The classes were widely known as “paper classes” because of the one requirement for completion.

The scheme collapsed when Crowder retired in 2008, resulting in the dramatic decline of the football team’s GPAs. “The fall 2009 semester — the first in over a decade without Ms. Crowder and her paper classes — resulted in the lowest football team G.P.A. in 10 years, 2.121,” the NCAA report noted, with 48 students reporting GPAs lower than 2.0, the minimum required by the NCAA to play Division 1 sports:

In the meeting, two members of the football counseling staff explained to the assembled coaches that the classes “had played a large role in keeping underprepared and/or unmotivated players eligible to play.” To emphasize this point, they presented a PowerPoint demonstration in which one of the slides asked and then answered the question, “What was part of the solution in the past?”

The report indicated that high-level university officials were not aware that the fake classes existed, but dinged them for not realizing that there was actually a problem.