Undercovered: 2015 Was a Dangerous Year to Be an Environmental Activist

Undercovered: 2015 Was a Dangerous Year to Be an Environmental Activist 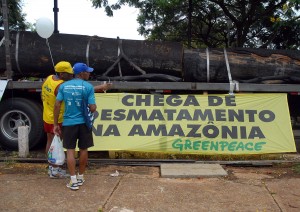 Welcome to Undercovered: our daily feature bringing attention to stories we feel deserve a larger audience.

The deadliest industry to protest was mining, and the deadliest country was Brazil, where 50 died, many protesting illegal logging in the Amazon. Two-hundred environmental activists were killed in Brazil between 2010 and 2015, the Guardian notes.

The most deadly industry to protest against was mining, with 42 deaths in 2015 related to anti-mining activities. Agribusiness, hydroelectric dams and logging were also key drivers of violence, Global Witness found, and many of the murders occurred in remote villages deep within rainforests.

In Brazil, thousands of illegal logging camps have been set up and are cutting down valuable hardwoods like mahogany, ebony and teak.

The report said criminal gangs terrorise local populations at the behest of “timber companies and the officials they have corrupted”.

It is estimated that 80% of timber from Brazil is illegal and accounts for 25% of illegal wood on global markets. Much of this is being sold on to buyers in the UK, US, Europe and China, and is contributing to one of the world’s highest rates of forest loss, the report said.

You can read the Guardian’s complete report here.

[photo: Protest in Brasilia, 2007. This photograph was produced by Agência Brasil, a public Brazilian news agency, via Wikicommons]