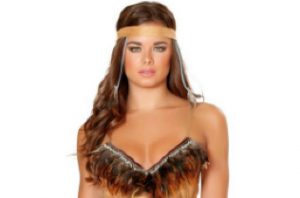 Remember when you were a little kid…when picking a Halloween costume was fun… simple? You just wanted to be a cowboy, Indian (in the parlance of the time), fireman, princess, policeman, hobo (yup) Cinderella, Batman, Superman, or Wonder Woman.

The little girls and boys of years past have now grown up to be big boys and girls who go to college and still like to the dress up in the same simple, fun Halloween costumes — with a little grown up flair. But if you’re a female student at the The University of Massachusetts, Amherst who decides to dress up as a ‘sexy Pocahontas‘ for Halloween, you’ll likely be labeled a racist who is engaging in “hypersexualized racism.”

No, folks you can’t make up such nonsense. Now, celebrating Halloween is a microagression, and white women wearing Indian costumes are engaging in cultural appropriation.

The Center for Women and Community, the Center for Multicultural Advancement and Student Success in censorship — I mean, collusion with the school’s diversity office, the Stonewall Center came up with this nonsense. The school’s in-state yearly tuition of $26,868 and out-of-state yearly tuition of $44,101 at is supporting salaries of idiotic people paid to create solutions for problems that don’t exist on university’s campus.

Student activity boards are cluttered with stupid crap like “Simple Costume Racism Evaluation and Assessment Meter” (S.C.R.E.A.M.) which asks students to follow a flowchart and answer questions to determine their costume’s threat level score. Green means your costumer is a low threat, blue is guarded and red is severe, meaning your costume is highly offensive and shouldn’t be worn. What is this North Korea or Saudi Arabia? Will students be imprisoned for exercising their Halloween costume freedom of speech . . .in America?

“No, it’s cool, it’s not like your ancestors killed them all or anything,” reads one flyer alongside a cartoon of two white women in headdresses, according to Campus Reform.

4. Remember That Culture is Fluid

“It’s not fair to ask any culture to freeze itself in time and live as though they were a museum diorama,” one poster quotes author Susan Scafidi, a lawyer and the author of Who Owns Culture?: Approriation and Authenticity in American Law. “Cultural appropriation can sometimes be the savior of a cultural product that has faded away.”

I don’t even know what that means. But I do know that liberal lawyer and UMass Amherst politically-correct hit squad won’t have any problem with students choosing to dress up like Trump supporters for Halloween or Donald Trump himself. Those costume choices would be well-received if not tacitly encouraged by the school’s diversity goons.