WARNING: Things are about to get NSFW…

How in the world did this happen? And who is about to get fired? Those are just two of many questions we can ask about US Airways Monday afternoon after the airline’s Twitter responded to a customer’s complaint with an image that just might traumatize you for life.

It started innocently enough, when someone named Elle tweeted at US Airways about an hour delay on her flight from CLT to PDX:

@USAirways Unhappy that 1787 sat for an hour on tarmac in CLT because overweight, resulting in over hour late arrival in PDX…

US Airways responded, as they do to nearly all similar tweets, with a sincere apology:

@ellerafter We truly dislike delays too and are very sorry your flight was affected.

@USAirways yeah, you seem so very sorry. So sorry, in fact, that you couldn't be bothered to address my other tweets.

Then this happened (black bar added): 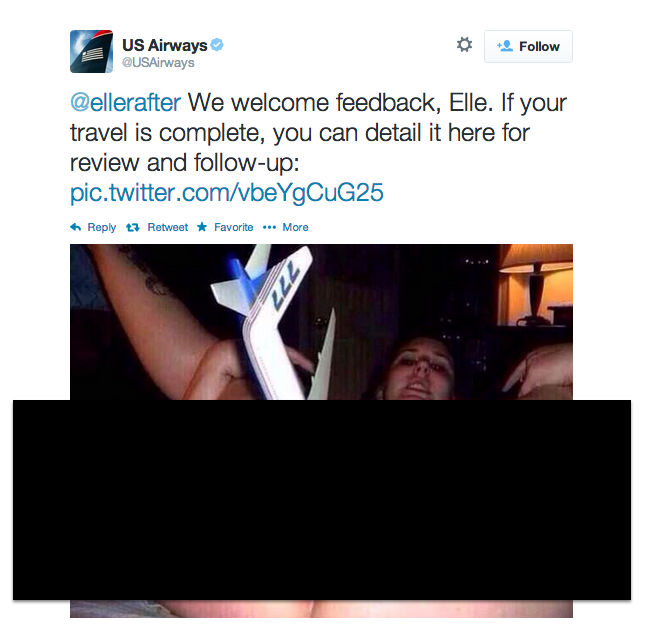 US Airways quickly deleted the tweet once they realized what they had done, but not before the entire internet had a chance to take some screenshots. To see the uncensored version, you’re going to have to go elsewhere on the internet. But seriously, do so at your own peril.

UPDATE (4pm ET): Shortly after deleting the tweet, US Airways issued the apology below and said they are investigating what happened:

We apologize for an inappropriate image recently shared as a link in one of our responses. We’ve removed the tweet and are investigating.