As protests in Charlotte descended into chaos and violent outbreaks on Wednesday night, a conservative columnist for USA Today put out a provocative tweet that seems to have led to his suspension on social media.

University of Tennessee law professor Glenn Reynolds is creator of the Instapundit blog, and he was following along with the protests being held after the fatal police shooting of Keith Lamont Scott. As the night progressed, his @instapundit Twitter account posted quite the message as he linked to a protest live-stream: 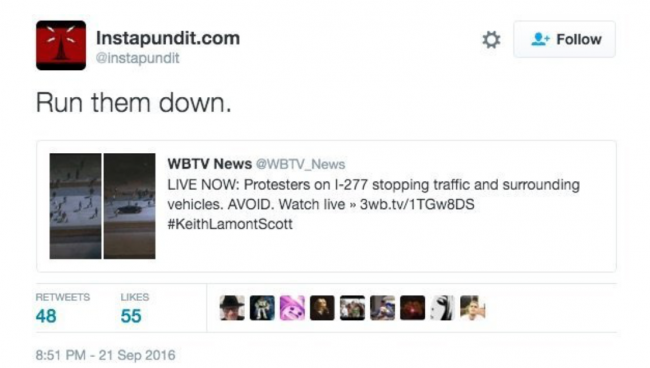 Instapundit was shut down on Twitter soon afterwards, and there have been calls for USA Today and University of Tennessee to sever ties with Reynolds:

That instapundit person openly called for violence against black folks and people are mad the account got suspended. I guess

@UTKLaw are you aware of the statement that Glenn Reynolds made? https://t.co/4N8MLYDZym

The lesson from the Clara/Jeffrey/Instapundit sagas is that the worst tweets come when people are using BLM riots to signal boost.

Just wanted to add my displeasure regarding your employee’s inciting violence against protestors, @USATODAY and @UTKLaw!

I see @twitter suspended Instapundit. For telling ppl surrounded by a violent mob in their vehicle to keep going, run them down if have to.

Even so, plenty of people view the suspension as thoroughly unfair:

The #SJW mob is out in full force. Now it’s @instapundit. Eventually it will be all wrong-thinkers.https://t.co/vC2EejLsPw

As for Reynolds himself, he took to his blog and accused Twitter of stifling viewpoints it disagrees with:

“Blocking the interstate is dangerous, and trapping people in their cars is a threat. Driving on is self-preservation, especially when we’ve had mobs destroying property and injuring and killing people. But if Twitter doesn’t like me, I’m happy to stop providing them with free content.”