UVA Dean to Rolling Stone: ‘So-Called Apology’ Is ‘Too Little, Too Late’

UVA Dean to Rolling Stone: ‘So-Called Apology’ Is ‘Too Little, Too Late’

The potential legal problems for Rolling Stone continue to mount this week as CNN reports that the University of Virginia’s associate dean of students Nicole Eramo has retained a defamation attorney for what could be legal action against the magazine for their portrayal of her administration in the retracted campus rape story published last year.

In a four-page letter to Rolling Stone publisher Jann Wenner, Eramo wrote, “Using me as the personification of a heartless administration, the Rolling Stone article attacked my life’s work.”

She also called the image of her used in the article “cartoonish” and “doctored” to make it seem as though she was giving a thumbs up to a rape victim: 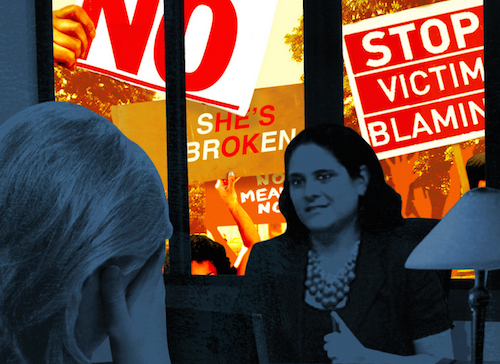 “Rolling Stone’s recent actions are too little, too late,” Eramo wrote, saying the magazine “has refused to hold anyone accountable, and the so-called apology came only after the Columbia Journalism Review issued its report criticizing the magazine’s reporting, which suggests that the magazine is more interested in currying favor with its friends in the media than truly making amends with those of us who have been hurt.”

“These steps are not good enough,” she declared. “The University of Virginia — and those of us who work for the University supporting victims of sexual assault — deserve better.”

Even after the Columbia Journalism Review issues its damning report on the article’s reporting, Wenner made it clear that no editors involved would be fired and that the writer, Sabrina Rubin Erdely, will stay on as a contributor.