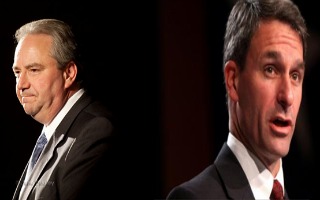 In the wake of 2012’s greater-than-expected losses for Republican politicians on both the national and statewide levels, the GOP is carefully wading into a period of introspection and course correction. As in 2009, in the wake of President Barack Obama’s victory and his party’s ascendency in the Congress, the Republican party will look to the 2013 gubernatorial contests in Virginia and New Jersey to reinvigorate the party. With the Republican primary battle in Virginia looming, two politicians with distinct and opposing views about how the party should reform itself are set to clash. The victor of that conflict my indicate whether the Republican party will moderate their views or stand firm behind a Tea Party brand of conservatism.

The Republican party’s losses on both the Senatorial and presidential level in November in the Old Dominion State, while relatively small, were devastating – they showed that Obama’s 2008 victory in that once-reliably Republican stronghold were not flukes. The shifting demography in Virginia is shared by other electorally critical states, and the Republican party’s inadequate showing in the 2012 elections could portend a cascade effect in other marginally pro-Republican states of the Old South like Georgia, South Carolina and Texas.

In 2009, Republicans took heart from their victories in New Jersey and Virginia’s gubernatorial elections. In 2013, the party will try to begin the rebuilding process again in Virginia while also holding onto the governor’s mansion in Trenton. In 2009, the party had a slim bench of candidates and Gov. Bob McDonnell did not face an especially competitive Republican primary. 2013, however, will feature two candidates with established constituencies and dramatically divergent governing styles.

Lt. Gov. William “Bill” Bolling has a history of electoral success. He served under then governor and now senator-elect Tim Kaine (D-VA) and became the first lieutenant governor in the Old Dominion state to serve two consecutive terms since 1998. Bolling served as Mitt Romney’s campaign chair in the state of Virginia in the last election cycle. Members of his political staff have been vocal about their frustration with the purism of the GOP’s Tea Part wing. In short, Bolling is the quintessential establishment Republican.

To Bolling’s right is Virginia’s Attorney General Ken Cuccinelli. He emerged shortly after his election as a national figure leading the state-level backlash against the federal government’s implementation of the Patient Protection and Affordable Care Act of 2010 when filed a law suit against the government just weeks after the act was signed by President Obama. Cuccinelli base of support comes from conservative activists in the grassroots and, while he is also an established politician who is not as gaffe-prone as some of the GOP’s more toxic Tea Party nominees of the recent past, appeals to the GOP’s class of professional outsiders.

The primary battle between Cuccinelli and Bolling is symbolic of the Republican party’s internal recalibration. In a crucial purple state which has been trending unmistakably blue in the last two election cycles, the Republican party’s leaders are certain to be more comfortable with Bolling’s candidacy. The GOP’s grassroots, however, will be eager to test the notion that a conservative candidate advocating conservatism unapologetically can win elections even left-leaning states. The outcome of that primary fight could indicate in which direction the Republican party’s voters want the GOP to go ahead of the 2014 midterms and the 2016 presidential election.