To promote his new cover story in Vogue UK, a writer who interviewed one of the actresses in the upcoming James Bond film, Spectre tweeted what he thought was a good joke satirizing the film series’ rampant sexism. However, his readers and competing media outlets disagreed — resulting in an all-too predictable (yet necessary) Twitter storm of righteous outrage.

It all started with Giles Coren, Vogue UK‘s restaurant critic, posted a tweet about his interview with French actress, Léa Seydoux. Coren wrote, “In the new Vogue I suck up to Bond girl Lea Seydoux by saying Bond is sexist, while quietly hoping she might shag me.” 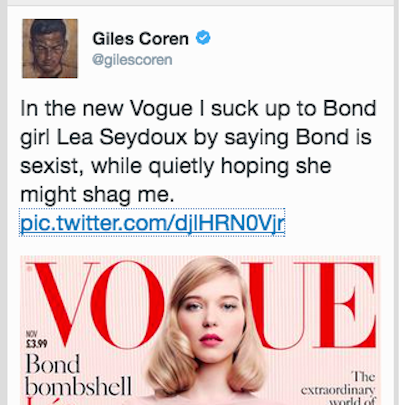 Coren quickly deleted the tweet, but not before Yahoo! UK got its hands on a screenshot and ridiculed the writer’s attempt at humor. Others quickly joined in on Twitter. Some enjoyed Coren’s original post, but most considered it a bad joke at best and an overly sexist comment at worst.

Despite the criticism, Coren relished the attention and responded to many of his supporters and detractors:

@charlottelait My anger about the sexism of Bond films is well documented. And my Vogue piece covers it again. The tweet was a bad joke.

@charlottelait which was why I took it down. this by me was the only one to speak against skyfall and went viral: http://t.co/sD5tCHTIhG

@kitlovelace doesn’t everyone quietly hope to shag everyone? is there anything wrong with quiet hope?

@YahooStyleUK how is that sexist? how is passive hope that a film star and fashion model will take the initiative demeaning or reductive?

@YahooStyleUK thing is, I was pretending to have been disingenuous about feminism, when I hadn’t. possibly too tortuous a satire for twitter

@FelicityHannah ta. silly of me though, on twitter, to have pretended to be sexist to puff a piece which is totally feminist.

With Gawker having joined the fray in the United States, Coren’s attempt at 140-character-or-less satire will likely see a surge in interest in the Internet rage machine today. Yes, it was a bad joke, and yes, it was terribly sexist. Then again, all of this came from the same Vogue UK restaurant critic who published a book titled How to Eat Out.