CNN’s Calm, Rational Reaction To Eyjafjallajokull: ‘Is The Earth Striking Back?’ 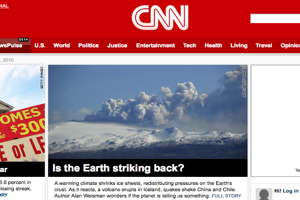 It sounds like the title of an obscure Huffington Post column, but it’s today’s top story on CNN.com: “Is the Earth Striking Back?” Author Alan Weisman warns that the side effects of democracy in America are causing the earth to “strike back” at humanity with earthquakes and volcanos. Suddenly, global warming is the least of our problems.

Most of the column is a long-winded, nostalgic look at a drive Weisman once took on the road that passes by Iceland’s Eyjafjallajokull volcano. If you enjoy Tolkien-inspired, overly-detailed setting descriptions, you’ll be glad to know “the sun lolled at the horizon but never set, turning to crimson the basalt cliffs that face the Atlantic” and other aesthetic trivia. For the rest of you: Iceland is pretty– now skip that half of the article.

Then, after a rather simplistic description of the development of democracy both in Scandinavia and America comes this apocalyptic vision:

Both Iceland and the United States exalt democracy as a social achievement worthy of lasting an eternity. Yet the latter’s unprecedented strength has derived not just from enlightened government, but from the release of its own hot clouds: exhaust from its vast industries, fleets and mechanized agriculture. As we have learned, these gases form an invisible barrier that, like a greenhouse’s glass ceiling, keeps reflected heat of the sun from escaping our atmosphere. The denser that gaseous barrier grows, the hotter things get and the faster glaciers melt.

As they flow off the land, we are warned, seas rise. Yet something else is lately worrying geologists: the likelihood that the Earth’s crust, relieved of so much formidable weight of ice borne for many thousands of years, has begun to stretch and rebound.

As it does, a volcano awakens in Iceland (with another, larger and adjacent to still-erupting Eyjafjallajokull, threatening to detonate next). The Earth shudders in Haiti. Then Chile. Then western China. Mexicali-Calexico. The Solomon Islands. Spain. New Guinea. And those are just the big ones, 6+ on the Richter scale, and just in 2010. And it’s only April.

In other words, American democracy=pollution=more water=earthquakes/volcanoes? Never mind that it’s China, and not the United States, that is the world’s largest emitter of pollution, and China is far from being a democracy. Never mind, with Haiti being the largest exception, that those major earthquakes mostly occurred near fault lines that were known to cause them. And let’s especially ignore the fact that when ice melts into water, the water doesn’t suddenly stop weighing on the earth such that the planet is “relieved” of any pressure. The pressure may be redistributed across the planet, but then it would follow that some areas would receive more, not less, pressure, thus balancing the weight out.

If CNN was trying to grab people’s attention by warning that the recent global earthquake trend is a sure indication that the plot of The Day After Tomorrow is true, they probably succeeded, but making a top story out of shameless environmental sensationalism may not be the best way to celebrate a belated Earth Day.