‘Warren is a Wuss’: Bernie Sanders Fans Turn on Elizabeth Warren For Not Endorsing 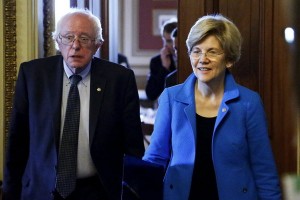 With the Republican presidential primary devolving into a Jerry Springer episode shot on location at the Thunderdome, it’s easy to forget the sundry internal dramas playing out among Democrats. While there’s an obvious split between the Obama coalition that largely supports Hillary Clinton and the progressiver-than-thou wing that supports Bernie Sanders, there now appears to be a schism-within-a-schism developing between Sanders supporters and progressive saint Senator Elizabeth Warren.

At issue is Warren’s failure to endorse Bernie Sanders ahead of Super Tuesday, which supporters feel could have delivered Sanders a victory in the closely-fought Massachusetts primary. RawStory’s TBogg collected some Bernie fans’ reactions from Warren’s Facebook page:

Your unwillingness to endorse Bernie prior to Super Tuesday indicates to me that your fear of pressure from Hillary friends on Capitol Hill “trumps” your commitment to the progressive cause. I have lost faith in you and the DNC.

Elizabeth – is there ANY reason on God’s green earth that you’re sitting quiet in the corner while Bernie is awaiting your endorsement? Am I missing something here???

Is she really part of the establishment? How can she, as a representative of the people, as a self proclaimed progressive, not publicly endorse Bernie Sanders? Do you think she owes Clinton some political favors? hmmmm.

With every day that passes without your endorsement of Sanders, Wall Street rejoices, and the corporate owned Hillary Clinton is validated. Shame on you.

Sen Warren let all of the progressives down and the country by not endorsing us before Super Tuesday. With her help, we could have and should have won Mass. Why and what does she have up her sleeve???

Karl Rove’s money? Are you smoking crack? I love Elizabeth and would have supported her over Bernie had she chose to run, but I am deeply disappointed in her for not supporting Bernie when it mattered. She will lose ALL credibility if she supports Hillary at any point as Shillary is tied to Wall Street.

You have let all progressives down. Sanders can still win, but if he doesn’t that’s on you. And when Trump defeats Clinton that will be on you too. You’re a sellout. Your endorsement will not save Clinton and we will not vote for her. It’s worthless now.

Warren is a wuss. Her silence will not be forgotten.

Senator Warren: I will no longer support or contribute to you or your campaigns. I think it unconscionable that you can continue to condone the corruption in Washington by NOT endorsing Bernie Sanders. I am actually shocked that you would leave a fellow progressive twisting in the wind, as the Clinton Circus rolls into your state and cheats her way to a very narrow win. You’ve made it very clear: you’re only interested in your political career, not showing solidarity to the people promoting the important causes that you apparently only pay lip service to.#FeelTheBern

I sincerely hope that another progressive runs against Warren so that she can be voted out of office as a reward for her cowardice. I understand Warren is in a difficult position, but this is a time for courage.

“In the End, we will remember not the words of our enemies, but the silence of our friends.” – Martin Luther King Jr.

There were also many comments supportive of Warren, including the inevitable accusation that the complaining “Bernie bros” are actually Hillary Clinton operatives, because there’s no better way to spend money than a disinformation campaign on a Facebook post about the Fisk Jubilee Singers. What’s truly adorable is the Warren fans’ assumption that Sen. Warren is anything but a politician herself, and who maybe wanted to spare herself the embarrassment of endorsing Sanders and watching him lose anyway.

At this point, it’s unclear whose campaign would even benefit from a Warren endorsement. She earned enmity from the Obama wing when she participated in a smear campaign accusing President Obama of sexism, and as TBogg pointed out, her endorsement of Sanders would be a case of way too little, way too late.