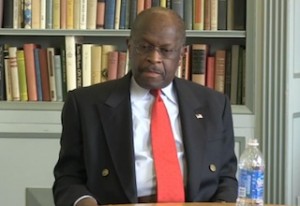 Since becoming the GOP frontrunner, Herman Cain has had to deal with a far greater degree of scrutiny. For the last two weeks, the media has taken a much closer look at allegations of sexual harassment that have dogged his campaign of late, but the more challenging questions have focused on Cain’s readiness for the office of commander in chief. Take, for example, his recent interview with the editorial board at the Milwaukee Journal-Sentinel, in which a seemingly easy question about the Obama administration’s handling of the uprising in Libya threw the GOP presidential candidate for a Rick Perry-esque loop.

Cain’s detractors have consistently dismissed the former restaurant industry executive and motivational speaker, claiming that he is not a serious candidate. The homespun and folksy manner in which he speaks on the campaign trail may have resonated with a disenfranchised Tea Party base, but in the context of actual foreign policy, Cain’s critics see banal and oversimplified explanations. The brain freeze exhibited in the clip below evokes that of Rick Perry’s notorious debate gaffe from last week, though this was in a far less public setting.

If a working knowledge of current foreign policy is a prerequisite to be taken seriously as a presidential candidate, then the following video suggests that Cain is, in fact, not ready for prime time. If his presidential run somehow gets derailed, however, he can still hold on to his dream of becoming the Secretary of Defense.

Watch the cringeworthy segment below, courtesy of Milwaukee Journal-Sentinel: