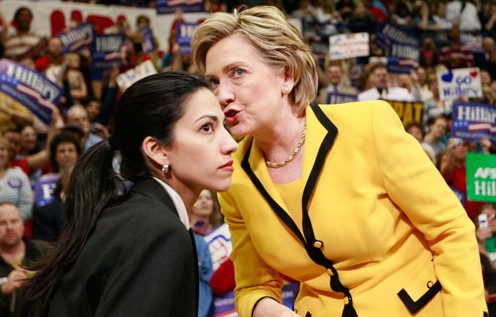 Conservative watchdog group Judicial Watch has revived allegations of corruption at the State Department under then-Secretary of State Hillary Clinton after obtaining new emails as the result of a court order.

As Fox News reports, the State Department was forced to hand over roughly 1,600 documents from Clinton’s top aide Huma Abedin as part of a Freedom of Information Act lawsuit. According to Judicial Watch, not only do those emails further show mishandling of classified information, the prove ‘pay-to-play’ took place between the State Department and the Clinton Foundation.

Several interactions between Abedin and Doug Band, an official of the Clinton Foundation and top aide of Former President Bill Clinton, show Band giving orders to the State Dept. employee.

In May 2010, Clinton Foundation donor and developer Eddie Trump (no relations to President Trump) reached out to Band in hopes of getting the Russian American Foundation involved in a State Department program. Band forwarded the request to Abedin, inquiring whether it was possible to “get this done/mtg set.” According to Judicial Watch, the State Department had also granted the RAF more than $260,000 for “public diplomacy.”

In July 2009, donor Steve Bing had an associate contact Band looking to secure visas to Cuba for employees of his film production company, Shangri La Entertainment. Band sent the request to Abedin, asking her to call Bing’s associate “asap,” to which Abedin said she would. Bing had reportedly donated $10-$25 million to the Clinton Foundation.

In September 2009, Terrence Duffy, chairman of CME Group and a Clinton Foundation donor, directly asked Secretary Clinton by email to set up “government appointments” in Singapore and Hong Kong. Clinton forwarded the request to Abedin, who said she would “follow up” with his secretary.

“Would like to get some more information and details so we can try to help,” Abedin wrote in an email, to which Duffy’s secretary replied, “We would also like some help in arranging meetings with some key govt officials in both locations, such as the Prime Minister of Singapore, and would appreciate any help you may be able to provide.”

Judicial Watch President Tom Fitton called on Trump’s Department of Justice to look into what he believed was “violated laws.”

“The emails show ‘what happened’ was that Hillary Clinton and Huma Abedin obviously violated laws about the handling of classified information and turned the State Department into a pay for play tool for the corrupt Clinton Foundation,” Fitton stated while mocking Clinton’s new book What Happened. “The clear and mounting evidence of pay for play and mishandling of classified information warrant a serious criminal investigation by an independent Trump Justice Department.”