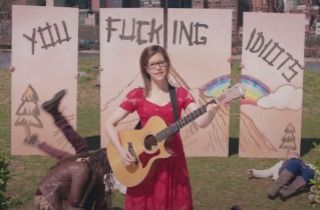 In his HBO debut, John Oliver went after Oregon for a major screw-up in its state health care website, even mocking a cutesy ad for the website with Lisa Loeb singing for all the “stupid Oregon idiots.” Well, the ad agency behind the parodied commercial in question fired back this week with a post titled “Yes, John Oliver, We Are Stupid Fucking Idiots.”

Oliver was bewildered that Oregon threw a quarter of a billion dollars at a website that didn’t work right, and now they just shut it down and handed the reins to the federal health care website. NORTH picked up on Oliver’s parody and acknowledged the errors with the state rollout, even if they “had nothing whatsoever to do with the $200m+ dollars spent to build Cover Oregon’s online application portal.”

They refer to Oliver’s “brutal” parody and other criticism they’ve received from conservative blogs, and addressed whether it’s fair for the mock ad song to call Oregon “stupid fucking idiots.”

Given the world today, you have to be a stupid fucking idiot to want to help activate a legislation so controversial.

You have to be a stupid fucking idiot to suggest a strategy that unites people around a common good before selling them on something as complicated as health insurance.

You have to be a stupid fucking idiot to think advertising can actually help improve the quality of people’s lives.

But at North, we welcome stupid fucking idiots. And I’d do it all again just the same, proudly.

You can watch the Last Week Tonight segment below, via HBO: