We Shouldn’t Cheer When Journalists Abandon Neutrality to Attack Trump 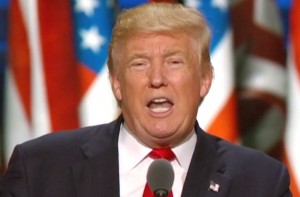 The New York Times openly questioned Sunday whether Donald Trump is so dishonest, so dangerous, and so far outside the American mainstream that journalists should set aside their neutrality and take sides.

In his lede, The Times‘ Jim Rutenberg floated the proposition that journalists should abandon longstanding standards given their strong feelings about Trump:

If you’re a working journalist and you believe that Donald J. Trump is a demagogue playing to the nation’s worst racist and nationalistic tendencies, that he cozies up to anti-American dictators and that he would be dangerous with control of the United States nuclear codes, how the heck are you supposed to cover him?

Because if you believe all of those things, you have to throw out the textbook American journalism has been using for the better part of the past half-century, if not longer, and approach it in a way you’ve never approached anything in your career. If you view a Trump presidency as something that’s potentially dangerous, then your reporting is going to reflect that. You would move closer than you’ve ever been to being oppositional. That’s uncomfortable and uncharted territory for every mainstream, nonopinion journalist I’ve ever known, and by normal standards, untenable.

But the question that everyone is grappling with is: Do normal standards apply? And if they don’t, what should take their place?

I would think the hypothetical in the first paragraph has an easy answer: you cover him by objectively reporting on his more dangerous ideas, fact-checking his incorrect statements, and setting your opinions aside when you’re on the clock. That is to say, you comport yourself based on how journalists have comported themselves for centuries.

Rutenberg cites approvingly the examples of CNN’s Brian Stelter and MSNBC’s Joe Scarborough, both of whom openly criticized Trump in recent days. Those are imperfect examples of course; Scarborough is a former politician hired for his opinion, Stelter’s criticism of Trump’s comments came in the context of criticizing Sean Hannity in his role as CNN’s chief media reporter, and in general cable news hosts have greater leeway in presenting their opinions than most journalists. But in any case, I have grave misgivings about the notion that reporters ought to abandon the anchor of neutrality over a temporary political force like Trump.

First and foremost, that seems like a great way to ensure that every story written about Trump comes with a giant asterisk. There’s a reason, to give an example, that Gabriel Sherman‘s scoop that Fox News’ Roger Ailes has been sexually harassing women for years was largely ignored when it first came out years ago. Sherman, through his actions and rhetoric, had built up a reputation as an anti-Fox News crusader, making others wary to touch his reporting and giving Fox an easy excuse to dismiss it. It didn’t matter whether or not that reputation was accurate, it was enough to sink what should have been (and later became) a massive story.

If tomorrow, Fareed Zakaria had the scoop of the century and reported that Donald Trump said X, Y, or Z terrible thing in a private setting, many in the media would gobble it up. But others in the media and the general population alike would recall how Zakaria called Trump a “bullshit artist” and stood by those comments. Zakaria, in short, would be viewed as nothing but another anti-Trump partisan and his reporting would be treated in light of that fact.

And that wouldn’t just be Zakaria’s problem. Your average American tends to see the national media as monolithic. They have a hard enough time distinguishing between outlets’ editorial and news content, let alone distinguishing between one outlet’s preferences and another. If Zakaria is biased, then CNN is biased. If CNN is biased, why then “the mainstream media” must be biased. Therefore, the thinking goes, all negative press coverage of Donald Trump can be safely ignored… all thanks a handful of nominally objective journalists who decided that their political views came before their professionalism.

The second problem is that partisans have a tendency to overreact about just how “dangerous” their opponents are. Before Donald Trump was a dangerous authoritarian who would destroy America, so was Mitt Romney, so was John McCain, so was Barack Obama. Remember when Ronald Reagan was an geriatric madman who would engulf the world in nuclear war and return American society to 1950? Or when Romney was waging a war on women across the country and gave that poor woman cancer? Who could be more dangerous than that?

So when I hear the notion that journalistic ethics should be abrogated because Trump is so radical, I see a slippery slope. There’s no limiting principle that would stop left-leaning journalists from doing the same to every Republican who is ever nominated based on their own subjective judgments of how “dangerous” that person is– judgments that often appear ridiculous or overblown in retrospect. It’s simple enough to say that journalists should take a stand against fascism and racism, but some liberals treat mere disagreement as evidence of fascism and racism.

I pick on liberals because the nature of the profession is that they tend to outnumber conservatives (only about 7% of journalists consider themselves Republicans). But I would say the same if the profession was dominated by conservatives. When roughly half of the population disagrees politically with the vast majority of journalists, having those journalists show open partisanship is a great way to further erode public trust in the media.

Lastly, the whole enterprise stinks of elitism. If it really is so obvious to reporters that Trump is evil, dangerous, autocratic, etc., it ought to be equally obvious to the American public if the media just gave a straight recitation of the facts. To feel a burning anxiety and need to attack Trump from on high betrays a lack of confidence in the American voter. It isn’t enough for outlets to report that Trump would be open to dropping a nuke on Europe, we now need to be force-fed our opinion on how bad that is.

The anxiety from reporters seems to be driven primarily by the fact that there remains a substantial (albeit ever-shrinking) segment of the population that is content to ignore or explain away every single disqualifying remark Trump makes. There’s simply one right opinion, and many Americans have reached the wrong one, the thinking goes. Therefore, it falls to their intellectual betters to explain exactly why they’re wrong.

But there are already hosts of columnists, pundits, politicians, cable news hosts, and advocates who have the very, very easy job of explaining why Trump is a disaster. To believe that adding their voice to the conversation would make a difference, journalists need to either believe that a) they have ideas and arguments that thousands of others have failed to make, or b) their opinion carries more weight in the eyes of the public. Both propositions strike me as misguided at best, and fairly arrogant at worst. The era of Walter Cronkite is over; the media simply lack the trust and sense of infallibility that once made Americans pause and heed their warnings.

The only concrete benefit for journalists speaking out against Trump is that it will temporarily ease their conscience. In exchange, they only need to shred their credibility… and the credibility of the entire American media establishment with it.