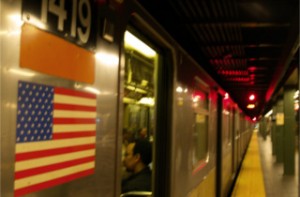 The New York primary is in less than two weeks — which means this campaign is now definitely about one thing and one thing only: pandering to Gothamites.

We don’t want to see a debate or a “town hall” or Ted Cruz emceeing a sock hop at the Brighton Beach JCC.

We want to watch the remaining three GOP candidates get let loose into the infernal hellscape of commuter frustration and grungy incubator of workaday democracy we call the MTA subway system, and be forced to find their way to their destination.

Here are Mediaite’s predictions for what would be the greatest political death match this side of Hamilton’s duel at Weehawken:

While on an 8th Avenue-bound L train, Sen. Ted Cruz asks four pregnant women to stand up so he can lie down on their seats and a fifth to stand up so he can have some place to set down his valise. He reminds them all that when he’s president they can still get quality reproductive care at their local podiatrist.

Something falls out of Cruz’s lip and every passenger flees at the Bedford Avenue station. The conductor announces that due to the Cruz’s opposition to legislation providing federal aid for Hurricane Sandy relief, his L train will be delayed indefinitely for repairs. His train comes to a stop under the East River and both ends of the tunnel are sealed in concrete.

John Kasich misses each and every Manhattan-bound N train at the Atlantic Avenue station because he’s too busy spending all his money on deep-fried churros and cayenne-coated mango spears hawked on the platform by gracious Guatemalan women who have no idea who he is, but are happy to keep taking his money and feeding him, while he regales them with stories about his father’s postal route.

Donald Trump is loudly praising each individual buttock and breast he espies on his uptown C train when the conductor announces that due to a “sick passenger” at West 4th St, the train will be making only express stops. Trump explains to everyone that he’ll replace Obamacare with something so great that passengers will never be sick again. When a mariachi bands enter his car, Trump pulls the emergency break, mistaking it for the launch button of a private ejector pod.