What Does Jeremy Lin Have To Do With Politics?
LINSANITY

What Does Jeremy Lin Have To Do With Politics? 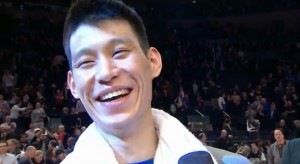 It appears that even President Obama has caught a spell of Linsanity.

New York Knicks guard Jeremy Lin has revived the team, propelling them to a seven-game winning streak and pulling them back to an even 15-15 record. Lin’s story has drawn attention from around the world, and has some people thinking much bigger than just the NBA. “I have seen tweets urging Jeremy Lin to run for the Republican nomination for the Michigan senate seat,” noted Salon’s Andrew Leonard. Others are comparing Lin’s rise to Rick Santorum’s in the GOP race during the same week. As Lin has proved his doubters wrong, he’s come to symbolize something much bigger in the presidential election. Here are three lessons that commentators say the GOP can learn from the Harvard-educated starlet:

1. Minority vote is up in the air. “[I]f Republicans were to rid themselves of their anti-immigrant wing, or if they choose not allow their primaries to be controlled by it, there is no real reason why Asian-Americans can’t become a true swing constituency,” argues Marc Ambinder in GQ. He faced discrimination in his childhood, but thanks to his basketball skills, he “rose up through the most meritocratic institution in society.” He earned his spot on the team, and at Harvard. “That up-by-the-sneaker-laces narrative is a vital part of Lin’s appeal—and the Republican deal.” To win this fall, the Republicans “desperately need minority voters in a diversifying America without straying from conservative policies,” and Lin’s story is one example of how they can achieve it.

2. He worships privately. Much has been made of how Broncos’ quarterback Tim Tebow publicly praises God whenever he gets the chance, says Keith Boykin at BET.com, which rubs some people the wrong way. But Lin does it right – “everyone is aware of his faith and they respect him.” China has outlawed mentions of Lin’s Chirstian faith, but religious freedom is something we take seriously in America. Lin understands that it’s his right to worship or not, and he keeps it to himself without forcing his beliefs onto others. “That’s a civics lesson the opportunists in the GOP have yet to understand.”

3. Lin embodies the American Dream. “His story reinforces much of what Americans prize in our culture and history. He personifies upward mobility, modesty, inclusiveness, courage and patience, piety, and above all, success,” says Richard Brodsky at The Huffington Post. He can rescue us. “Jeremy Lin’s candidacy for President will solve that problem. I don’t promise to vote for him in the general election, but a candidate with Jeremy Lin’s strengths and nuances would help save the Republican Party and make everyone feel good.” That’s what we need right now.