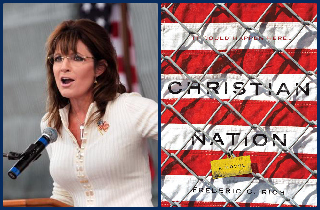 That’s how the first chapter of a new alt-history novel called Christian Nation ends, beginning readers along a journey described as a “terrifyingly credible path toward theocracy,” led by President Sarah Palin after President John McCain unexpectedly passes away.

The book, written by lawyer Frederic C. Rich and published by W.W. Norton & Company, is based on Palin’s famous 2010 remark that “America is a Christian nation.” Envisioning a Palin presidency, Christian Nation describes an alt-history in which “America’s Christian fundamentalists” gain power and transform the country into one in which “constitutional protections [are] dismantled” and “all aspects of life dominated by an authoritarian law called ‘The Blessing,’ enforced by a totally integrated digital world known as the ‘Purity Web.'”

Aside from the book’s description on Amazon.com, scant details have been released about the plot, but it has already received two big thumbs up from various political organizations.

“The scariest thing about Christian Nation is that it’s so plausible,” said Americans United for Separation of Church and State’s executive director Rev. Barry W. Lynn. “No violent revolution, no blood in the streets, is necessary for Americans to lose their freedoms—just a failure to defend the liberties that we often take for granted.”

In another blurb, American Civil Liberties Union former president Nadine Strossen wrote: “This riveting novel should join Sinclair Lewis’s It Can Happen Here as an American classic… Please, read this book and then pass it on to six other people, making it into a chain letter for liberty.”

Christian Nation is due to hit shelves on July 1.