What the ‘We Hate Trump, But We’re Voting for Him’ Crowd Doesn’t Seem to Get 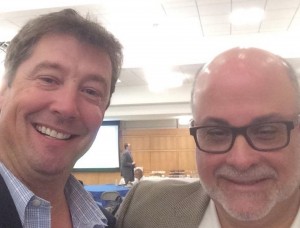 Last night, the ever shrinking group of “Never Trump” conservatives officially lost a major voice, as radio host Mark Levin announced that he will vote for Donald Trump for president. Interestingly, back in May, Levin came up to me at the annual Talkers Magazine Conference and wanted to address some columns I had written here about the conservative media having sold out to a man I perceive to be a liberal conman.

I was pleasantly surprised that Mark had the guts to address my criticism of him directly (my view was that Levin was way too soft on Trump when it really mattered and only became a harsh critic after it was too late to stop him). He told me something very close to, “I don’t necessarily disagree with what you’re saying… I just don’t think I really belong on the list.” We even took this photo to commemorate the fact that I respected him being willing to explain himself rather than to just hide like most of the Trump apologists in radio did that day.

But now I guess Mark has decided that he wants back on the “list.” As someone who has always thought Levin is one of the smartest and most principled radio talk show hosts, I can understand his rationale. In short, he thinks that Trump is horrible, but that Hillary Clinton is way worse and that we have an obligation to vote for the lesser of two evils.

As a radio host myself, I am suspicious that the ratings pressure to get on the Trump Train, and the difficultly of doing a conservative show where you are constantly bashing the GOP presidential nominee who is facing a despised rival, may have played a role in Levin finally giving in (wanting to maintain his close relationship with Sean Hannity and Rush Limbaugh may have also been a factor). But even after giving Mark the benefit of that doubt, I still think he and others like him are missing, perhaps on purpose, some very important points.

There are several flawed premises in this very common argument being used by many prominent conservatives to rationalize their support of Trump (in a way which, surely by coincidence, just happens to mesh perfectly with their career self-interest). The first is that we supposedly have strong evidence that Hillary would be worse than Trump.

Despite what my many clueless critics have accused me of over the past several months, I loathe Hillary Clinton and have an excellent record of condemning her and her corrupt husband for many years (back when Trump was giving them money and inviting them to his wedding). I think she would be a poor president who would ensure a further leftward tilt of our court system and do her best to expand the role of government/liberalism in our lives. However, as the conservative Dallas Morning News pointed out while endorsing her, I do think that she at least knows the basics of the job and would be unlikely to get the country into a real crisis out of complete incompetence or a simple lack of discipline.

Trump, on the other hand, is someone whom literally all bets are off if he became president. I honestly have no idea what he would try to do policy wise and I would fear that all sorts of catastrophes could be created because he simply has no idea what he is doing (the idea he is relying on “I’ll hire the very best people” while hiring a D-list campaign team is laughable) and lacks the proper temperament for such a pressure-filled job.

For instance, it is abundantly clear that Vladimir Putin would rather have Trump as our president and that he may have very good reason for that desire. That alone should give conservatives great pause before supporting Trump in any meaningful way.

In short, I see the potential downsides of a Trump presidency to be significantly worse than that of the repugnant alternative. But even if I am wrong in that assessment, there is still a very strong argument that true conservatives shouldn’t support Trump.

While there is very scant evidence that Trump is remotely “conservative,” should he somehow get elected, conservatives would surely end up getting the blame for whatever he did. Not only that, but assuming the GOP kept control of congress, he would have far more ability to get his agenda (whatever the heck it really is) into law. Specifically in the area of illegal immigration, a Trump unconstrained from having to worry about his duped base, would be in a FAR better position to get an “amnesty” passed than Hillary could ever dream of without a congressional landslide.

All of this would create the worst of all worlds for conservatives. Our policies would get blamed without ever really being tried and the news media would make sure that at least a generation of voters never remotely trust our side again. The GOP would forever be branded as the party of racists who gave us the failed presidency of an obviously unqualified president. And that might be the BEST-case scenario! How would it not be better for conservatives to sit this one out and reload to beat a failed and highly unpopular Hillary in four years?

There are those, like Levin, who claim that Trump can be relied on to at least be more conservative than Hillary in a couple of key aspects. Illegal immigration, tax policy, and judgeships are the most common areas where a rational argument can be made (trust me, it is excruciating to think Hillary may chose Antonin Scalia’s replacement). My problem is that I don’t trust anything Trump says on any of these topics. He has made past statements on all of them which indicate that his real beliefs are either far more liberal than currently advertised, or simply don’t exist, as he shifts to whatever is in his self-interest at that particular moment.

The “dirty little secret,” which no conservative in a commercial endeavor will tell you (because saying anything remotely positive about Hillary is about as toxic in conservative circles as praising Jerry Sandusky, and maybe even less so than defending O.J. Simpson), is that it’s quite possible the “real” Hillary is actually less liberal than the “real” Trump.

While obviously a liberal, Hillary is at least a former “Goldwater Girl” who spent a lot of time in Arkansas, until recently had moderate positions on social issues and Wall Street, and who strongly supported the Iraq War. Trump can’t credibly make any of those claims and specifically his bizarre and completely ignorant “understanding” of the Iraq War should be an instant disqualifier for real conservatives to support his candidacy.

My sense of Hillary is that she is actually a fairly moderate (by today’s standards) Democrat who has shifted over the years purely to get nominated, despite never having accomplished anything significant in her career. My sense of Trump is that he has no beliefs at all and is uniquely unqualified for the position.

Neither is remotely acceptable for the “Leader of the Free World” and I will not be voting for either of them. It saddens me that so few “conservative” media stars feel like they must support Trump when almost all of the rational scenarios indicate the country and our cause would be better off in the long run if he lost, preferably badly. But at least Trump has lost another excuse for if/when that happens.

John Ziegler is a nationally-syndicated radio talk show host and documentary filmmaker. You can follow him on Twitter at @ZigManFreud  or email him at johnz@mediaite.com