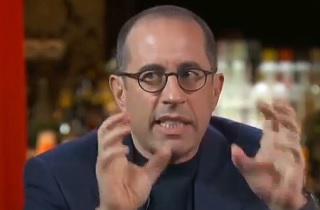 Jerry Seinfeld is a legend, a stand-up comic whose influence is impossible to overstate, an innovator along the lines of a Jimi Hendrix or an Orson Welles. In the most difficult performing art that there is, Jerry Seinfeld is among a tiny handful of comics who truly changed the game, not just rewriting the rules, but the language they were written in. It is fitting, then, that Jerry’s hostile, defensive reaction to an interviewer’s observation about diversity in his web series Comedians in Cars Getting Coffee begs this question: What is the deal with that?

During an interview for the BuzzFeed Brew series, BuzzFeed‘s Peter Lauria nervously told Seinfeld “I have noticed that most of the guests are mostly white males. Of twenty-two episodes…”

Jerry cut him off with a contemptuous “Yeah, let’s get into that!”

Over a flummoxed Lauria, the comedian continued, “Take a look around, Peter, what do you see? A lotta whitey! What’s going on here?”

Sufficiently warned off the race issue, Lauria squeezed out a question about the Tina Fey episode, carefully disclaiming any reference to gender diversity as well. Seinfeld gave a nothing response, then circled back to diversity on his own.

“People think it’s the census or something, it’s gotta represent the actual pie chart of America. Who cares?” he said, adding, “Funny is the world that I live in. You’re funny, I’m interested. You’re not funny, I’m not interested. I have no interest in gender or race or anything like that, but everyone else is, kind of with their little calculating, is this the exact right mix. To me, it’s anti-comedy, it’s more about PC nonsense than are you making us laugh or not.”

It was an ugly reaction that prompted a visceral response from Gawker’s Kyle Chayka, which in turn prompted a mocking response from Mediaite’s own Noah Rothman, which is why I ever got to see it; so thanks to both of those guys for destroying a comedy hero.

Seinfeld accuses “everyone” of making fine calculations based on minute deviations from the census, but let’s just break that down; let’s see how fussy these overly sensitive PC types are being.

Comedians in Cars Getting Coffee features 25 guests, two of whom are black, and two others of whom are women. If we were applying demographic proportions here, statistically speaking, Seinfeld’s only one black guy short of meeting his quota, but well shy of the 13 or so women he ought to have. However, Seinfeld works in a field in which black comics dominate far beyond their proportion in the general population. Seinfeld himself starred in the 10th highest-grossing stand-up comedy film in history, but eight out of the top nine starred black comics, and the ninth starred a woman.

So why, then, could Seinfeld not find more than two worthy black stand-up comics, or one woman, for his show? In fact, he even passed over talented black and female comics in favor of many white guests who aren’t even comics, like Fey, Alec Baldwin, and Seth Meyers. What’s the deal with that?

The simplest interpretation of this observation, and likely the one that caused Seinfeld to react with such hostility, is that Jerry Seinfeld is some kind of latent racist/misogynist, because any observation about race is a de facto accusation of racism. To be fair to Seinfeld, Chayka’s criticism, that Seinfeld “seems to suggest that any comedian who is not a white male is also not funny,” does sound an awful lot like that, because he tries to make a point without making an argument. Seinfeld says the only thing that matters to him is funny, so if black people and women are underrepresented, that means, by extension, that they’re not funny.

The second simplest interpretation of this is that Jerry Seinfeld is an impartial arbiter of humor, and the results are what they are, and anyone making the observation is a hyper-sensitive pussy.

The argument that Chayka fails to make is that Seinfeld is reacting to an accurate observation, that black and female comics are underrepresented in the admittedly small sample of guests on his show. That means that something is missing. Either black or female comics are undeservedly missing from Seinfeld’s sample, or they are missing the talent necessary to make it onto Seinfeld’s radar. Jerry’s response, that he doesn’t care about factors like race and gender, only funny, leads to the conclusion that the natural result, intended or not, is such underrepresentation.

There is another way of looking at this, though. Faced with the observation that his show skews overwhelmingly white and male, Seinfeld could wonder, to himself, “What’s the deal with that?”

There are many deserving comics who aren’t making it onto my show, he could observe, so maybe black people don’t like coffee that much, or maybe my driving makes women uncomfortable, or maybe I’m just not seeing a broad enough array of comics. Hell, maybe it just worked out that way for the first 22 episodes, and I need to be better at calling people back a second time.

The idea behind diversity is not that everyone gets their fair share of the Jerry Seinfeld webisode pie, it’s that theoretically, if we’re choosing comics based on their relative merit, the natural result should roughly approximate the diversity of the field and, if it doesn’t, maybe there’s a reason for that. The “quota” isn’t the object of the exercise, it is one measurement of it. It’s something to think about, and if Jerry Seinfeld did think about it, there is no way he would conclude that there are only two black comics worth getting coffee with, or one female comic. He would conclude that, for whatever reason, he missed something.

Instead, though, Seinfeld makes the choice not to think about it, and not to care about it, because the mere observation equals accusation, and thinking about it, discussing it, equals an admission.

As with most white males, it is Jerry Seinfeld’s privilege not to care about diversity, but I guarantee his show is the poorer for it. Not that there’s anything wrong with that.

Watch the video below, via CBS News/BuzzFeed: