What’s With All the Outrage over Lena Dunham’s ‘Dog or Jewish Boyfriend’ Quiz? 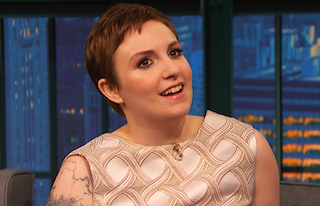 Controversial memoir author, Girls creator and occasional New Yorker contributor Lena Dunham has the Anti-Defamation League (ADL) up in arms over a new “Shouts and Murmurs” piece from this past week’s magazine titled “Dog or Jewish Boyfriend? A Quiz.”

“Humor is a matter of taste, and people can disagree if it is funny or not,” ADL National Director Abraham H. Foxman said in his humorless statement. “Some will certainly find offensive Lena Dunham’s stereotypes about cheap Jews offensive. Others will take issue with the very idea of comparing a dog and a Jewish boyfriend.” He then went on to invoke signs that read “No Jews or Dogs Allowed” and the “sinister” way that “many in the Muslim world today hatefully refer to Jews as ‘dogs.'”

What are some of the silly quiz questions that have the ADL up in arms?

8. I feel that he is judgmental about the food I serve him. When I make something from scratch, he doesn’t want to eat it, but he also rejects most store-bought dinners.

9. This is because he comes from a culture in which mothers focus every ounce of their attention on their offspring and don’t acknowledge their own need for independence as women. They are sucked dry by their children, who ultimately leave them as soon as they find suitable mates.

14. And he never brings his wallet anywhere.

The ADL doesn’t mention this one:

For the record, Dunham’s real-life boyfriend is fun. guitarist Jack Antonoff (a Jewish-American), though given the fact that the article is a piece of humor fiction, it’s unlikely all of the quiz entries apply to him — or her dog for that matter — literally. Also, her mother, artist Laurie Simmons is Jewish and the actress has said she considers herself “very culturally Jewish,” adding, “although that’s the biggest cliché for a Jewish woman to say.”

“We doubt that Ms. Dunham had any intention of evoking such comparisons,” Foxman added in his condemnation. “While we understand that humor is its own special brand of expression and always try to give leeway to comedians, we wish that she had chosen another, less insensitive way to publicly reflect on her boyfriend’s virtues and vices. We are surprised that the New Yorker chose to print it.”

The ADL’s official statement comes on the heels of criticism from other (mostly conservative) media figures:

How on earth did the New Yorker decide it was OK to publish this disgusting @lenadunham antisemitic garbage? http://t.co/B56HwIZxX1

this is probably the worst thing the new yorker has ever published… shocking. http://t.co/C1WAHLESHx

Voice of a generation huh http://t.co/XXd8wWWGkJ

It's constantly amazing to me how a magazine as incredible as the New Yorker can just suck so bad at humor: http://t.co/FX9ezbzGTt

Imagine if a conservative wrote this, comparing a Jewish boyfriend to a dog: http://t.co/ykhkeJ1pkU

So @newyorker are you going to answer anyone as to why you published this racist trash by @LenaDunham? http://t.co/SkJzn5uZSs

Did no New Yorker editor ponder the wisdom of literally comparing Jews to dogs? http://t.co/XsKJY7vrDM

Hey @lenadunham. Now I'm not gonna date you for even more reasons: http://t.co/5wOcFRgYfN

Ignorant, anti-Semitic piece in @NewYorker by @lenadunham. Dating a Jewish man does not mean you can compare them to dogs. Obviously.

So far, both Dunham and Antonoff have stayed silent about the backlash to the piece on social media. Earlier this year, Dunham said that “deranged neocons” had caused her to stay off of Twitter as much as possible. “I don’t care what conservative white men think about me,” she said in a subsequent interview.

If Jews aren’t allowed to make borderline offensive jokes about Jewish stereotypes anymore, really what has America come to?

“The Jewish-comic tradition is rich with the mockery of, and playing with, stereotypes. Anyone who has ever heard Lenny Bruce or Larry David or Sarah Silverman or who has read ‘Portnoy’s Complaint’ knows that. Lena Dunham, who is Jewish and hugely talented, is a comic voice working in that vein. Richard Pryor and Chris Rock do the same about black stereotypes; Amy Schumer does it with women and gender. I don’t mind if one reader or another didn’t find the piece funny. People can differ on that. But considering all the real hatred and tragedy in the world, the people getting exercised about the so-called anti-Semitism of this comic piece, like those who railed at Philip Roth a generation or two ago, are, with respect, howling in the wrong direction.”