When A Comments Section Goes Bad

When A Comments Section Goes Bad 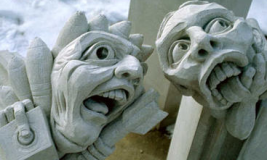 Brian Ries at The Daily Beast has penned an interesting piece on the low level of discourse in the comments section of many political blogs and whether or not it’s representative of the nation’s current political discourse. Case in point: Ben Smith‘s Politico blog.

“A running conversation about politics,” is the tagline of his blog. But if a conversation is a two-way exchange of ideas, it has become anything but, he says. “A good comments section is a reason to visit a blog,” he adds. “I fear that mine is, if anything, a reason not to…Smith has been called a “weasel,” a “flaming liberal,” a “Journolister,” a “liberal hack,” an “establishment politico” who will be eaten by Sarah Palin for lunch, a “first grader,” “a basketball player with no jump shot,” a “piece of snot,” a “3 year old transexual, wanker,” and a “commie.” When Smith recently published a bland, one-paragraph post, highlighting an ABC News report about GOP Leader Mitch McConnell, the first comment was “Shut the f.ck up ben, and take your journOlist buddies to cuba.”

Sadly, this sort of “discourse” (if it can be called that) is likely all too familiar anyone running a website these days. Including this one, as regular readers are all too aware. Solution? Smith is contemplating banning his comments section altogether (though he admits he has already given up on it: “it’s not an interesting conversation.”) Andrew Sullivan doesn’t have one at all (he curates his), and Gawker Media implemented a tiered system.

It’s tricky business, especially for less established blogs; comments equal much-coveted page views, but unregulated they can frequently also turn off readers who’d like to participate productively but find themselves chased away by the sort of name-called excerpted above. Alas, if the recent “discourse” of some prominent politicians is anything to judge by things may not get elevated anytime soon.